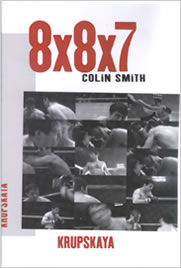 At the Vancouver Positions Colloquium, it was great to see some old friends and acquaintances and to hear new work by writers whom I have known a long time. And it was nice to meet people whose work I have long known but whom I have never met, like Fred Wah, who continues to have a broad influence on the poetry of the Vancouver area and beyond. In a few cases though, not only was I hearing new work or meeting a writer I had never met before, I was meeting writers I had never even heard of before. One of those writers, Colin Smith, gave one of the most powerful readings of the colloquium, and I immediately picked up a copy of his book published by Krupskaya, 8x8x7. The book is every bit as powerful as his reading and I hope more people will find out about it and read it and buy it.

Smith’s book, and his reading, certainly shared in the tenor of the conference, and in the traditions of Vancouver avant poetries, in a focus both on global power structures and the most immediate details of the here and now and how connections between the two might be traced. He shares a Vancouver poetics also in the biting, ironic wit and rapid fire politicized quips that mark so many (thought not all) of the male poets I admire from that region (the female poets share it too, although they’re more likely to risk sincerity or aestheticism without sacrificing a keen politicized edge). But Smith’s work is marked by personal and painful immediacy, one that can sometimes be difficult to include in a poetics interested in understanding and critiquing large scale economic realities. Which is to say that his work often details, very affectingly, the fact of how these economic realities really do hurt individuals, and how it feels to be hurt.

Smith had perhaps the single best quip of a quip-filled colloquium. “Ready!——Fire!——Aim!” from 8x8x7's opening poem, “Just,” left the audience with one of those groaning laughs of recognition that continue to reverberate long afterwards. I’m still teasing out all the contexts to which such a phrase is too perfectly applicable. At the same time, the fact of his own obvious pain was apparent in his reading and can be found throughout the poems. This pain is both physical (chronic problems with his spine, he told me if I’m remembering correctly, can make it difficult for him to walk or stand for too long a period of time) and a function of being poor in the center of an economic boom which is making a few people rich and disenfranchising many others. “How can you say I’m committing a crime?/ I’m/ just/ sitting here,” he concludes at the end of “Just,” exposing readers to the ongoing history (one that in Vancouver lately has been amped up as the 2010 Olympics approaches) of making it a criminal act for people to have nowhere to go. Although he was a Vancouver resident for many years, he now lives in Winnipeg, a city where for the moment he seems to have found it more possible to survive.

8x8x7 consists of a number of poetic sequences of various lengths, many about 8-10 pages of accumulated reflections, critiques, one-liners, outbursts, and howls of recognition. From “Leper Hockey Punchline”:

The soup that thinks outside the can.

Eat crap, die, and leave
a luminescent biohazard of a corpse.

He lifts his spirits by reading Madame Bovary
while listening to Joy Division.

Would I think thrice
before donating Charles Dickens books
to people in prison?

War and unemployment
are the energies
of our economy. Cold and Hungry Please
Spare Anything

“Symptoms of vomiting and nausea”
“Alleged photos of torture”
Ask about our ‘hit the ceiling’ guarantee!

You are automatically entered.


The development of each poem isn’t so much narrative as associational, yet the overall affect paints a thorough picture of an individual subject to economic and social forces vastly beyond his control, forces that claim to be impersonal even as they wrench from those subject to them the most personal confessions, doubts and failings. Smith doesn’t reveal any of this through a conventional telling of his own tale, but through the way the snippets converge and diverge in a sort of globalist pointillism. His poems don’t so much map an overarching schema of social and economic landscapes, as for instance Jeff Derksen’s work (itself also very impressive but in a much different way) does, but bring us right to the points of contention, the sore spots, the sites of emotional anguish. Even as Smith’s poems remain really very funny, there’s the same sense of unbearable pain that one gets from Jack Spicer poems, a feeling of being overwhelmed, just from listening, by the suffering in the poem. But the irony and humor of many lines is not a distancing or muffling of anger, or even a way of making it more palatable, so much as it is an act of momentary relief from a tension that just keeps building. These are poems that can do things that political theory, for all its value, usually can’t: tell us what it feels like, all over one’s body, to be losing out in the midst of an economy that claims to be booming.

Oddly enough perhaps, there’s something intensely energizing about 8x8x7, just as there is about Smith himself, with his humor, generosity, and really just friendliness and willingness to converse. The poems in the book never completely give in or give up even as they acknowledge the many moments when giving up seems the only sensible reaction. There’s a sense of fight in these poems that I can’t help but admire—a fact which the cover art of the book, a montage by Frank Mueller of some of the boxing scenes in Martin Scorsese's Raging Bull, both points to and ironizes. A fight which shows the ridiculousness and often hopelessness of fighting, yet continues to strike back with whatever power it has, and does so with insight, hilarity, and a willingness to open its own most vulnerable conditions. From the book’s final poem, "Goodbye (Riddance)":

Because the closest to a safe home
I’ve ever known
was a psychiatric hospital I lived in
for 6 months when I was 14.

Chronic pain abstracts you
from yourself while making it impossible
to abstract chronic pain.

Smith’s book is hardly a self-congratulatory attempt at fighting the good fight. But it shows very well the degree to which the desire for self-determination and self-respect is perhaps the most essential power to tap into when struggling against forces and individuals who would take those things away from people.
Posted by mark wallace at 4:26 PM