Poetry in Baltimore and the i.e. reader 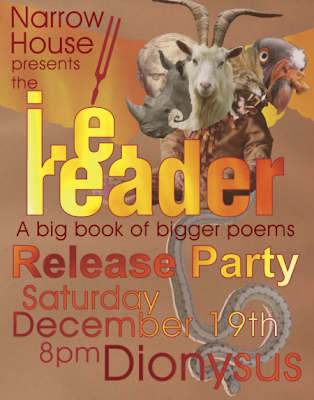 I’ve just finished reading the recently released i.e. reader, a chunky collection of poems from a variety of writers who have read at the i.e. reading series, hosted by Michael Ball, which has been running in Baltimore since May 2005. Michael is one of those people who works very hard in his own local environment to create opportunities for other people in the world of literature. He’s an energetic, restless, and sometimes even practical visionary who doesn’t come from any fancy side of anywhere, literary-wise or other, and whose work life, which I can’t claim to be entirely sure about (construction worker, handyman, painter and I don’t mean of paintings, things of that kind), nonetheless hasn’t taken away his love not just of literature but of helping to make literature happen. He’s a fine poet too, although it’s characteristic of his modesty that none of his own poems are included in a collection of work from a series he himself curates and hosts.

In the brief curator’s note that opens the collection, Michael mentions his indebtedness to the folks from Narrow House in Baltimore, the publishing group that has put out books and CDs from a significant group of contemporary poets and which produced and published the i.e. reader. Justin Sirois has been the founding brains and braun of Narrow House, and he works these days with Lauren Bender and Jamie Gaughran-Perez and, I think, in earlier days worked with others. Michael also mentions his close working connection to those of us who were running (and many of course still are; it’s just me who’s moved away) a variety of reading series and small presses in Washington, DC.

Although I don’t remember the date exactly (it must have been some time early in the 2000s), I remember first meeting Justin and some of the other young Baltimore poets. At the time, it felt like a significant change in the poetry energy in that part of the world. There hadn’t been much of an avant/experimental poetry scene in Baltimore before that, at least not any that I was aware of. All of a sudden there was a new group of energetic young writers traveling into DC for readings and doing their own events and publications in Baltimore.

Sometimes, it really doesn’t take any more than a few interested people willing to work hard and pay attention to get a literary community on its feet and on fire. In the early years of this decade, much of the new energy from Atlantic-area poetry below the Mason Dixon came from that Baltimore crowd, an infusion that I at least felt was very important for those of us in DC who were getting a bit woozy from years of effort.

I last read in Baltimore in May 2006 at an event hosted by Michael, and I think I met him for the first time that night. A man a few years older than me who had the marks of having lived a life of fairly tough experiences, he wasn’t immediately one of that younger crowd of poets but he had every bit the same level of enthusiasm and energy. His effort during the reading and afterwards made for a lively and memorable day that’s actually chronicled in a piece of my own writing called “We Need To Talk.”

As the list of contributors shows, the i.e. reader contains work by a combination of well-known avant poets, up-and-coming poets, and poets who have labored a long time making poems in Baltimore. For me, reading the book was some combination of nostalgic and informative about just how the world of poetry in that area has shifted since I moved away from the east coast.

There’s going to be an i.e. reader poetry event happening in Baltimore tomorrow night. Along with last weekend’s 20-year anniversary reading for Edge Books in Washington DC, it has clearly been a time for celebrating some of the significant literary work that has been done in that part of the world. It’s a subject worth celebrating. Needless to say maybe I’m more than a little sorry that I’m not going to be a direct part of either event. Just couldn’t get away from California in time, although right about now I sure wouldn’t mind being elsewhere. I’ve got the travel bug today and I’ve got it bad.

There are a lot of intriguing poems in the i.e. reader. Like a few other collections and anthologies that focus on a local scene but don’t feature exclusively local writing, the i.e. reader probably makes most sense for people who are part of the area community, or who are aware of the dynamics that make literary communities work, or who have some significant understanding already of directions in contemporary avant work. Yet I’m also going to use the book in a creative writing class this spring because of the impressive range of poetic approaches on display. It doesn’t contain explanatory or contextual material, not that by any means it automatically needs to, but it certainly constitutes a record (although, of course, not even close to a complete one) of what a group of people can do if they decide to work together where they live to make poetry an essential part of an active life that always involves much more than poetry.

As anyone who’s paying attention knows, the field of poetry, like any other, is regulated by systems of power and influence and connection and all the small foibles of who knows who and why and what’s in it for anyone. But it’s also made up of people who don’t stay at home, waiting for someone to discover them, but who make the effort to create opportunity for themselves and others. For me, that sense of working with people to make something happen is easily as important as anything else that literature may supposedly be about.

And if I don’t post again before that, Happy Holidays to everybody.
Posted by mark wallace at 9:07 AM

met sirois when he was out here doing a few bay area readings...used one of his drawings for the cover of an issue of my mag both both...

Mark, this write-up makes all those hours editing and designing and (now) mail worth it. Thank you.
I'll pass this along to everyone.

And we all miss ya.

other past curators have moved away too...

if you'd chance a gander- i have a poetry sequence- mole fizz
www.molefizz.wordpress.com