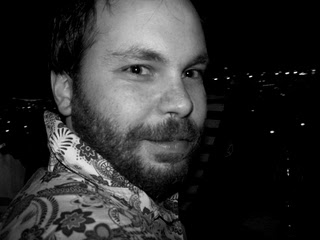 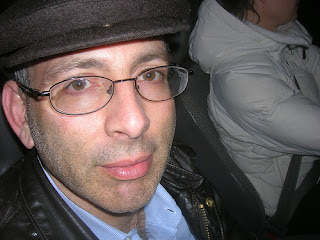 Donato Mancini’s AEthel is a focused, nuanced, and frequently minimalist book of concrete visual poems that gain power through Mancini’s use of repetition and engaging variation. The visual poems are split into two basic series. One consists of letters constructed from different typographical systems that have been combined, melted together, and stretched in ways that make the original letters usually (though not always) illegible. The other juxtaposes visual images of hands, similarly melted and blended, that at the same time are both clearly hands and yet not-so-clearly different from each other.

The titles of each piece, placed beneath or beside the images, are poems both in themselves and in their resonant, never precisely defined relation to the visual details floating above or alongside them. Each title (such as “Xxtreeme Author-Function,” or “I Think Therefore I Am Not Sure”) intriguingly and often satirically twists and combines phrases, some of which are recognizable in the history of literary and cultural theory, and others of which come from some of the oddities of ordinary daily language.

Both the visual poems and their titles reflect back on and alter each other, as well as the proceeding and following pieces, through these different interactive serial changes. While each piece, on its own, has a unique visual interest, where AEthel most excels is at showing the interconnectedness of language and visual systems and, by implication, the interconnectedness of human bodies that both deploy and are deployed by those systems.

If it isn’t already, it should be a truism that literature developed through procedures that take language from outside the author’s subjective vocabulary is no less free of the marks of an individual writer’s concerns and obsessions than other kind of literature, though it may distribute those marks in ways different than the poem fundamentally attempting to express a unique subjectivity.

Given that, I was eager to read Benjamin Friedlander’s Citizen Cain, a collection of flarf poetry by a writer who has neither been stuffily dismissive of flarf or whose work has been significantly defined by it. For awhile now, Friedlander has been one of the most inventive contemporary poet-scholar-critics, able to write game-playing critical work that is literature in its own right, while he has also written understated, subtle lyric poems that recall at times the poetry of Robert Creeley and at times a graceful, thought-provoking European lyric influenced by a broad array of poets and philosophers, including Emmanuel Levinas and many more.

Of the Friedlander whose work I have encountered over more than a few years, I was curious to know what echoes would still remain in the context of the crude reveling in the contradictions and incoherence of contemporary Internet speech for which flarf is either reviled or loved. And Citizen Cain didn’t disappoint: although its gleeful vulgarity is not much different from a lot of flarf, there’s a greater range of historical reference, both cultural and literary. Ezra Pound, T.S. Eliot, and long historical mistreatment of Jewish people and culture are just as likely to appear in Citizen Cain as “Hugs, Fudge, and 41 Cellphones,” the title of one of the poems here.

Of course, flarf has always been at least partly an investigation, purposely irreverent, haphazard and slapstick, of contemporary cultural conditions, but Friedlander writes flarf that has a larger and more explicit sense of history than most other flarf attempts, although it resembles some of the historical sense of one of the first and still most crucial works of flarf, K. Silem Mohammad’s Deer Head Nation. The opening to the poem “The Chinese Written Character as a Medium for Poetry,” among many pieces, makes this larger historical context clear:

The Chinese cantos are about a girl
who lived in the Song dynasty
about a thousand years ago.

The girl was not only poor but crippled. Happily,
there was a Shriners Hospital
in Louisiana

People who hate flarf on sight will not give a pass to Citizen Cain. Friedlander fully indulges himself in the pigfuck grossout bathroom humor fests that give fans of flarf giggles and enemies conniptions, which the book’s very first poem, “Biological or Social Female Parent of a Child or Offspring and Its Poetry,” hardly allows readers to avoid:

Kangaroo poo eaten by a kitten
made you into a “back-up” turkey,

in case my bird flopped. Mom,
you are simply red-

faced professor made up scary story
about moms and their poo

which, in consequence of Section 3
of this agreement, the turkey baster

can eliminate Eve’s curse with a flush—
and now there’s nothing new to eat!

Whether one finds Citizen Cain tough to read through, or not, depends on one’s ability to enjoy lines of this sort. For the most part, the book doesn’t add much that’s new to the most recognizable aspects of the flarf tone.

Flarf though it is, Citizen Cain is also unquestionably Benjamin Friedlander’s flarf. The book consistently and fascinatingly combines flarfy obsession over the detritus of contemporary culture with a larger contextual exploration of European and global history. Although it’s no doubt consciously ludicrous, Citizen Cain thus takes its place in the history of a writer who has matched tremendous critical and philosophical sophistication with constant undercutting of any too settled way of approaching literature or the world.