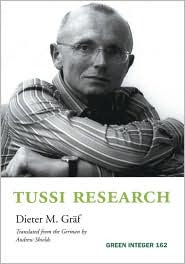 Containing poems translated from the German by Andrew Shields, Dieter M. Gräf’s Tussi Research (published by Green Integer) was a book I found consistently fascinating and worthy of re-reading, while at the same time I recognized that I was likely missing some or even many of its occasionally oblique cultural nuances.

Tussi Research features a series of poetic meditations on German culture and history, a history not just of many events over several centuries, but also of a variety of mythologies that also make German history and culture what it is. The book delves deep into the German Warrior mythos (my term, not Gräf’s)  and shows how interconnected this primally violent mythos is with German music, literature, culture, politics, and ideas about beauty, revealing that the brutality of German history and its most wildly beautiful artistic creations are so intertwined that it becomes impossible, or at least willfully naive, to think of one without the other.

The poems in Tussi Research explore these and related issues with fascinating indirectness. The poems are often elliptical, working by hints and suggestions, giving the feeling that something, as likely horrific as not, is happening just off to the side of what the poem is detailing. Then, frequently enough, the ellipsis suddenly emerges into a more direct brutality: “crown of thorns in scalp skin,/ martial eavesdropping of hammer/ blows in front of fainting:/listeners to his shattering bones” (45-46). These particular lines are by no means the most blunt moments in the book. Some of the most revolting ones highlight the fact that the brutality being describing is also part of a long history of male violence towards women.

The bluntness (and occasionally more comic shocks, like “the old/ God with a naked/ ass”(25)) inevitably comes along to disrupt the intense beauty that certain lines, with their lyrical energy, precision, and symbolic resonance, offer at moments: “autumn is over; green/wild parrots around last/leaves of the tree by the city/ woods. Warmer,/ now. More and more/ those who were killed/ dissolve, we walk on/ them, toward elsewhere, lighter,/ for meaning in the massacre/ of the eldest” (115). Many similar pastoral locations and images are also revealed as sites whose current beauty overlays some past incident of nearly unspeakable violence. Gräf’s poems frequently juxtapose the intensity of two types of physicality, one of surface beauty and another of the violation of that beauty. At a few moments, the drive for that intensity leads to a bit of overreaching: italics are used to emphasize the lyric power of words that already have enough power not to need further highlighting, with the result that the italics become unnecessary.

A lot of specific historical moments and figures are being referenced in Tussi Research, but the poems rarely let on as to exactly what those are. That’s probably one of the reasons that the book contains at its end a thirty-page glossary that provides more direct information about the people, histories, and mythologies being referenced. I read the poems the first time through without looking at the glossary and found the imagery powerful and mysterious and the rhythms complexly jagged. When I read the glossary and looked back at the poems, that dispelled their mysteries somewhat, although never entirely, mainly because Gräf’s glossary entries are often as poetic, and sometimes as elliptical, as the poems.

There may be a tendency in critical thinking about contemporary poetry to separate a materialist poetics from mythopoetics, a split in which the materialist approach considers mythopoetics too involved in flights of fancy, while mythopoetics disdains the too literal nature of the historical materialist. Whether I’m overstating the existence of that split or not, Tussi Research is fascinating also because of the way it breaks down the difference, showing readers how much historical conditions remain a function of cultural mythologies, just as those mythologies are bound to, and exposed by, the historical conditions that they are more than partly responsible for creating. If Tussi Research explores conditions too brutal to claim that reading this book will be pleasant, the poems here are ones that for that reason, and for the beauty and power they manage nonetheless, are not at all easy to forget.
Posted by mark wallace at 11:45 AM

Thanks for bringing this book and author to my attention with such a helpful review. It's now part of my research (and library).