I had fun reading both of your books, Rouge State and Musee Mechanique. Reading them together made me consider the issue of pre-flarf influences on what became flarf. Unlike some other people (and I say this neither for better or worse in comparison to them) your pre-flarf book Rouge State, with its whimsical, consciously exaggerated and often satirical lyricism, suggests that you were already moving in flarf directions before you became involved with the methodology. What that fact implies for me is that flarf didn’t come out of nowhere but to some extent involved a coalescing of ideas that were already floating around before the methodology became more definite.

Thanks for your note about my books, and for noting the connections between them. It's funny, when I joined the flarf listserv in Jan '03, I didn't have much of a sense of what flarf was supposed to be. It was still in the "giggle word" category, a kind of crepuscular rumor ... I don't remember anyone, for instance, calling Deer Head Nation a "Flarf" book at the time. I mean some may have, but it didn't seem to occlude or determine the reception of the book the way I think the term would now. What attracted me to the list then was the sense that things were still being explored, and all was permitted (esp. attractive during the lingering moral hangover of 9/11). I didn't feel like I was taking on any extraordinary aesthetico-political baggage by pushing the language and sensibility of Rouge State through the cyclotron of Google and this group of twelve-plus friends. 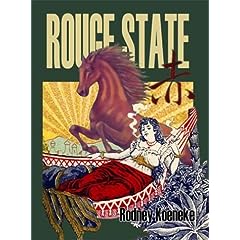 The attempts to define, critique, and/or defend flarf are so widespread and public now that I think it's hard to recapture that original sense of play, except as a kind of nostalgic re-enactment of the phase when it was play. (It doesn't help either that there are, like,10 flarf books in print now, though they don't seem much consulted as a rule in the, ahem, growing literature on the subject.) I have the sense that most readers who approach the work now labor under a notion of what flarf's already supposed to be; meanwhile, the participants themselves (though there's not much explicit discussion of this, on or off the list) seem to be reaching toward something like 'post-flarf'; a writing that keeps the core sensibility and collaborative bonhomie that brought us all together in the first place, but plays down the Google and the flashier cut 'n' paste disjunctions of an earlier era.

I'm not sure what this will look like yet. Gary's Elsewhere series seems like one instance; Nada's Folly reads as rather 'post-flarf' to me in its seriously playful suggestion that everything's Google. I'd thought to make Musee Mechanique an instance of "lyrical" flarf, to see how, or even if, the aesthetic could accommodate gestures toward the sincere, "finished," and feelingful. I've kind of amped up that exploration in the work I've done since, in way that I don't think would be recognized as what's currently thought of as flarfy. Personally, when Bush is out of office I think flarf will have lost its raison d'etre, and what's left of the practice formerly known as flarf will move in a different, if cognate, vein.

Send a nice short email, get punished with a long response! Please take it as a mark of how much I appreciated your note.

reading notley for the first time these days, I find her flarfy. Margaret & Dusty (1985) is flarfy. of course I don't know what I mean by that. I am happy to get to the point where I can read flarf so-called without thinking flarf flarf flarf flarf flarf. but now when ready non-flarf I do sometimes think "flarfy." la la la flarf flarf wamp wamp wamp.