Part Two: Literary Communities and the Ethics of Publishing: A Conversation with Carol Mirakove, Susan Schultz, and Mark Wallace 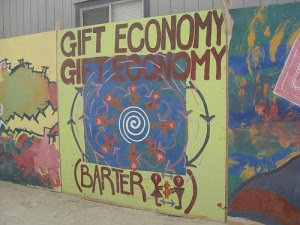 (Part One can be found here).

There has been some debate around the expectation that small presses should abide by rules and guidelines versus small-press publishing being fueled by a gift economy and donations. What kinds of transparency does a publisher owe to their readers and authors in terms of submission guidelines and publishing expectations?
SMS: I think we're caught between two models right now.  The old model was self-publishing and micro-press publishing.  That's where Tinfish started, publishing chaps of 100 copies and a very short run journal that was xeroxed.  But we rather quickly became a “real publisher,” meaning that our books cost more to produce and came out in larger runs.  The production values went way up.  So there was more need for resources.  It's very easy to get big fast, because there are so many worthy manuscripts floating around out there.  And I have no objection to presses that publish a lot—Salt and BlazeVox come to mind.  That doesn't mean they aren't publishing good books or that they don't care about what happens to their product.  They are working with possibility, which is a finer thing than prose . . . While I would never publish as many books as they do, I applaud them for their efforts.  And, if a publisher tries to live off of his or her work, why not?  It may seem “suicidal,” as someone wrote on an fb page, but so much more gratifying than many other jobs with steady incomes.
If a press asks for money from its authors, something I have no problem with, I do think they should be up front about it.  Otherwise, I don't think authors need to know the details, except perhaps to realize that the work of publishing involves a lot of resources by someone(s) else—editing, designing, printing, distributing, marketing, and so on.  Some of the nastiness of the recent discussions revolved around a fundamental misunderstanding of the work and resources involved.  My students sometimes tell me that they are going to make money with their poems.  One class accused me of not taking them seriously when I laughed at this notion.  We need to disabuse others of the notion that seriousness = money-making, while letting them know that it takes money to put out a product.  Our most recent Tinfish book cost us over $2,000 to print (600 copies) and I bought advertising cards and sent out review copies.  The book could have been less gorgeous, but we made our choices—it could also have been more gorgeous and a lot more expensive to make.
It's also a good idea, as Craig Santos Perez and others argue, for authors to work harder to promote their own work, and work that they think is important.  The problem there is that the fine line between disseminating important information and sounding like someone selling refrigerators (though my local Sears salesman was a former student!), is easily crossed.  Keep the emphasis on the work, is my advice.  Then make sure people know about it.
CM: Thank you for breaking that down.
MW:   The question of the transparency that publishers owe to readers and authors is an important one, and I like Susan’s answer. But is there any reason that the focus of transparency, even in this conversation, should be on publishers alone? Should there be transparency (and is there any?) in Creative Writing MFA programs? What about in education institutions more broadly? Or in the work of political organizations and corporations? The fact is, in all those larger social institutions, there’s little and sometimes no transparency. That lack of transparency serves the interests of those with most access to money and most power.
In the case that led to this discussion, a lot of the expressed frustration with small press publishers, and the expressed frustration about that frustration, comes from a context of massive lack of transparency and honesty in multiple institutions, and not just in relationship to literature. And while many small press publishers, Tinfish and Bloof and others, have been lately explaining and confessing the details of their practices, corporations fuel their power over public life by deploying much larger resources under legal cover and never have to mention it.

CM: Mark, you offer good points in helping us to get out of a myopic framework. At the same time, we don’t interact with small-press publishers on the same terms of MFA programs or corporations. I believe this merits a distinct (and useful) thread. The question I asked around transparency was specifically between a writer who might become a press author and the press. This is a different dimension than those in the relationships you bring up, e.g., I may get my MFA certificate based on the criteria spelled out in the application process, but the meaning of the MFA may not match the implied promise of the degree.
That said, I think one of the best parts of operating in the small-press publishing world is that a sketchy or shady corporate framework is not the standard. There are several people working hard to demand that corporations be more transparent, and I don’t think there’s anyone arguing that there should be low-transparency on any corporate or institutional agreements, so I don’t think it’s true that we’re asking more of publishers more than we are of more powerful institutions, even though the fact that we are often more successful in having reciprocal conversations with publishers makes it seem as though they are subject to more critical scrutiny.
MW: I appreciate you trying to focus the discussion more specifically. Your points have also helped locate for me one of the things I find myself concerned about in this conversation. We’ve put the focus on what writers might ask of and need from publishers, but I’m not sure we can ask that question fairly without also asking what publishers might ask of or need from writers. I think part of the reason that there was recent controversy was an assumption by too many writers that publishers are more or less just a writer service industry, doing the janitorial work of creating a nice clean place for writers to put themselves center stage. I’m not saying anybody thinks this consciously, but that’s often in effect what happens. It’s too easy for writers to think of small press publishers just as people serving to advance a writer’s career, instead of as people who are often writers themselves and who are also working collaboratively to put forward the interests of an interconnected group of people.
SMS: So the new model is “real publishing.”  And there's a need for it, because MFA grads and others need jobs.  To get a job teaching you need to have published.  And you need “real” books, not chaps, journal publications.  No quarrel there.  The quarrel comes in when the relationship between author and publisher becomes one of producer and—how to put this?--hired but unpaid help.  This model is much less personal, much more capitalistic, and much less equitable.  Another danger with this second model is that it makes publishing less a visionary enterprise than a business.  (Not that businesses can't be visionary, but I would rather use another metaphor for small press publishing, something that describes an enterprise between business and gift economy.)  Tinfish Press has been lucky that our vision has—in some instances, if not in many others—proved marketable, especially for classroom use.  “Experimental poetry from the Pacific” has been rare, until recently.  We helped create a market for it, and the texts with which to teach it.  Several of our books have sold in the thousands.  They help to pay for those that sell in the hundreds, or in the tens.
The discussion reminds me, in odd and mostly unparallel ways, of conversations in the adoption world.  We're talking about a practice (adoption, small press publishing) that has a value (spiritual, familial, aesthetic) apart from the monetary, but which inevitably enters the marketplace.  Then the question becomes, to what extent does our pure ethics inevitably get muddied by realities?  And how can we act ethically, even after acknowledging our lack of purity?
CM: Susan, you ask a complex question and I appreciate the depth of it. To begin, I believe we can act ethically by making a conscious effort to communicate constructively and with respect for each other. If you think someone is naive, maybe try to remember when you were naive and be a friend, be a neighbor -- if not to an individual, at least to the art.
If your goal is truly to have another poet shut up and sit down, I want to ask about the violence of that reaction.
Mark, I am glad you bring up that publishers might ask things of authors; it may be the question at the crux of this upset. I, personally, believe completely in cooperation. But, I continue to feel that disclosing the terms of cooperation after a manuscript has been accepted is not a good model, and I don't believe that mode is likely to yield positive relationships. Maybe I am proposing an undue burden on the publisher to have figured out what is needed from authors -- I do appreciate that a lot of publishing labor is already invisible and thankless -- but there is right now an opportunity for presses to consider publishing terms, and if they are stated up front then we might avoid vitriolic controversy.