5) Bob Dylan's Greatest Hits, Volumes 1 and 2 (10 Rock Albums That Made My Sense of Music What It Is) 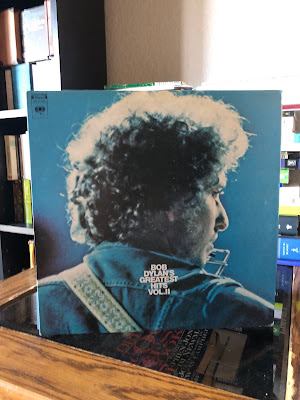 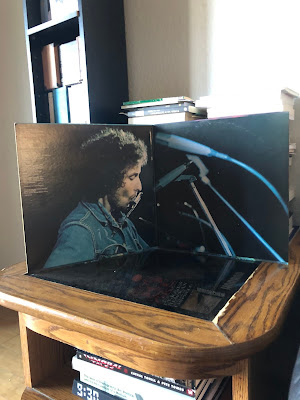 I'm listing these two as one entry because that's how they feel to me.

I don’t seem to have my copy of Dylan’s Greatest Hits Volume 1 anymore. I guess at some point the record seemed no longer necessary to keep, although I’ve kept volume 2, maybe because the song sequencing on it is really great. Obviously, I moved past these records to his actual original albums soon enough, but these albums really helped define Dylan’s work for me when I first came to love it. They’re also good reminders that as excellent as some of Dylan’s albums are, he’s especially impressive on specific, unforgettable songs.

Dylan was a musician my father recognized, mostly as a cultural icon. My parents’ collection of only a few records included work by Peter, Paul, and Mary, and maybe a Pete Seeger album, and a few classical records. My mother was fond of watching and listening to the Nutcracker around Christmas.

My father, a licensed minister who had become a professor, participated in the Civil Rights Movement and marched with Martin Luther King on several occasions. The church I was brought up in, New York Avenue Presbyterian, had a long history of involvement with activist politics in Washington, D.C.. And it had also been Abraham Lincoln’s church during the Civil War Years--that’s how far back it went as a church.

So Bob Dylan’s name came up in my house every now and then. I associated him for many years with the kind of gentle folk rock that was the only kind of popular music my parents ever played (and which they stopped playing probably by the time I was around ten).

I don’t recall when exactly in high school I picked up these, my first Dylan records, or what specifically prompted me to do it, but I had no idea what I was in for. I do remember being shocked.

I mean, this guy was HARSH, and funny, and his music had energy and bite and, hey, poetry. The word play amazed me. There was barely a whiff of gentle folky puffery on any music he made.

Over the next few years I bought a lot of Dylan records, beginning probably with his first and second, the two best of his folk-based records, and moving on quickly to his electric 60s period and after. I soon picked up the recently released albums of his Christian period (Shot of Love is a fine record; Saved is not) and beyond, including the big surprise of his 1983 Infidels when the Christian period vanished into what was then talked about as his “radical Zionism.”

I think the main thing that still makes Dylan controversial as a music icon is his negativity. Really, there’s not a whole lot of positive messaging with Dylan, and not much in the way of positive representations of people. He doesn’t have a kindly or generous outlook on women. He doesn’t like men either. He expresses very little of the stereotypical concept of “peace and love.” If he sometimes seems in favor of those things, it’s mostly because he’s describing a world of war and hate that he finds himself drawn into, whether he wants to be or not. And one of the undercurrents about Dylan that confuses people is the way he often did NOT want to be drawn into the social issues of his time, but ended up there anyway because that’s where the most powerful conflicts could be found.

He’s a writer of angry songs, of protests of all kinds, with more in common with the punks to come than with the sometimes optimistic political folk tradition in the U.S.

I think it’s that darkness, the serious rage, at the heart of Dylan’s music that forms my earliest identification with his music, like most of the music on my list so far.

I’ve sometimes wondered if you have to be raised in a religious context to really feel the double meaning of “Everybody must get stoned” in the song whose title most people often forget ("Rainy Day Woman #12 and 35").

Something that doesn’t get mentioned as often as it might is how good the playing is on many Dylan albums. The American folk scene musicians of the 60s frequently prided themselves on avoiding virtuosity in the name of making music that seemed in support of “ordinary people.” But there’s no devotion to an air of amateurism in Dylan’s music right from the first album. Soon, of course, he would go on to play with some of the best rock musicians of the 60s.

Also, while I can understand people saying they hate Dylan’s voice, that’s only because of its remarkable distinctiveness. Whatever rough-hewn singing influence Dylan took from Woody Guthrie, from the first he always sounded exactly and only like himself. His voice is as distinct as his song writing.

Dylan changed my understanding of what lyrics could do. Jefferson Airplane’s lyrics are poetic too, but Dylan’s lyrics bite big verbal chunks out of whatever subject they’re taking on with a daring that’s hard to match. Saying that is just obvious, I know.

I wasn’t part of the 60s counter culture. I wasn’t even part of the 70s counter culture and its slow fade into psychic oblivion. When it became the 80s, with that time’s growing hatred of anything that didn’t sound like a studio confection, liking Bob Dylan felt like a way of enjoying the idea that what I might say might mean something.

Not that it did.