10) Double Nickels on the Dime, Minutemen (10 Rock Albums That Made My Sense of Music What It Is) 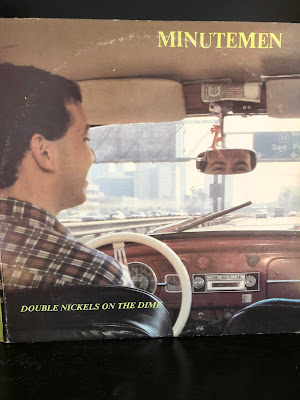 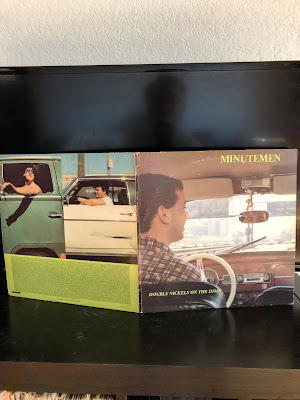 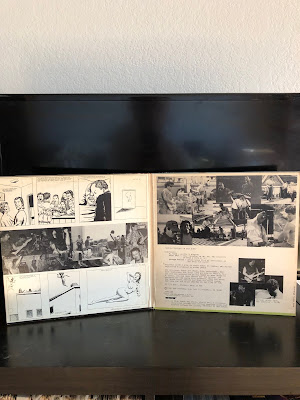 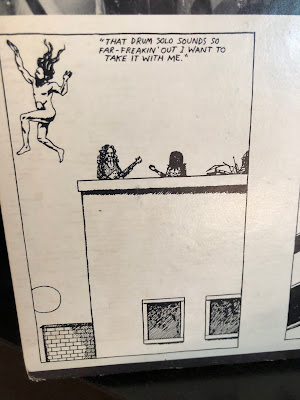 10) Double Nickels on the Dime, Minutemen

It looks like I have to get to #10 on this list before I finally reach an album that feels like it was of my own generation. Even though all the guys in the band were a good half decade older than me, above all others on this list this was THE album that felt to me like it was living closest to the actual world in which I was living. It had a unique sound, a different sound, a sound that felt like it was of my own moment. I can’t imagine what my own life as a writer would have been without Double Nickels on the Dime or this band.

1984 was the year that Americana punk rock (my term) hit its apex. The Replacements, Husker Du, the Meat Puppets, X, Dream Syndicate, the Blasters. Some of them had made excellent records in the few years before or had had moments of still developing excellence. All were bands that had been influenced by or been part of the late 70s early 80s American punk scenes (in various cities, maybe L.A. most notably) that were still playing punk that sounded a lot like American imitations of British punk.

Of course, the American hardcore scene had from the first sped up punk and pushed it to the edges of stridently aggressive political statement (the Dead Kennedys) or rageful and vulnerable poetic crashing and burning (the Germs). But the concept of short fast bursts of outraged thrashing (tightly and sophisticatedly played in the best groups) remained not just a norm. It quickly became a law of punk communities that you violated at your own risk.

By the early 80s, the limits of that hardcore law were all too apparent. Even one of the hardest hardcore bands, Black Flag, was caught trying to get outside strict and increasingly boring demands to maintain a purity of outrage and came out with an album that was at least as much Black Sabbath as punk. One thing that happened during the opening up was the exploring of regional American musical influence, something that allowed the influence of history to enter a music that had been defiantly about the present. Sort of a punk rock version of what happened in the later 1960s when rock and roll began to absorb country music influences.

There’s nothing particularly American in any general sense about Double Nickels on the Dime. But the effect of region on it is clear. This is the world as seen from San Pedro, an industrial working class suburb of Los Angeles, a port and warehouse town. From the first, Minutemen had made their young, working class connections deeply apparent. Even as the band remained connected to big city urban arty punk, its understanding of social and political conditions was too specific for that degree of romanticism. Put it this way; what Jefferson Airplane is to the Germs is what Creedence Clearwater Revival is to Minutemen.

I mean, consider: here’s a band who’s signalling on the cover of their greatest album that they intend to drive the speed limit (of 55 no less) and follow traffic laws because it’s the ethical thing to do. How punk is that? I’m genuinely asking. The debate that could follow from such a question was just one specific example of why the band was unique. How punk is it to actually be concerned about how your ordinary daily behavior affects others? Much of punk is about raging at what others have done to you.

The band’s name was a pun, of course, referencing not only those pre-U.S. Americans ready to step up and fight for the revolution, but also the fact that Minutemen had begun with a first album of songs rarely more than a minute in length. By Double Nickels, Minutemen showed themselves moving further beyond that initial concept; one song on the record, “Mr. Robot’s Holy Orders,” is actually over three minutes long (it was later chopped from the CD version of the album). Several other songs clocked in at just over 2:50, including key tracks like “The Glory of Man” and the satirical anthem “Jesus and Tequila.” They’re epics.

Much more important than the fact that the band’s songs remained all short on this double record originally clocking in at above 80 minutes is the fact that the short tight structures have so much variety. It’s a three person band: one guitar, one bass, one drum set, and on this album, mostly one singer. And while there are some general templates that repeat (anthemic power songs; off kilter high speed songs with angular riffs and surprising guitar breaks, both incorporating elements of funk and jazz; noodly poetic rambles that bassist Mike Watt had famously named “spiels), the album doesn’t sound repetitious. Each new song often provides fascinating and unexpected transitions from the previous song. The only other double album I can think of that has this much variety and no unnecessary songs while also retaining an overall tonal coherence is the Clash’s London Calling.

The playing poises itself right on that fine edge between the energy of amateur accident and the precision of virtuosity. Minutemen was not the only band of this era to transform quickly from barely being able to play their instruments to being unique musicians of impressive ability, but the change was remarkable.

Of course, D. Boon can’t really sing, in any conventional sense, but his voice is so full of personality and nuance that his lack of conventional training usually, not always, becomes a strength.

I don’t think my favorite sections of the album automatically differ much from anybody else’s favorites. The nuanced build of the interconnections on Side One. The explosion of brilliance at the start of side two (the great “Political Song For Michael Jackson To Sing” followed by the equally remarkable and totally different “Maybe Partying Will Help” and “Toadies”). The huge historical sweep of “The Glory of Man” later on side two and the stunningly moving memoir “History Lesson Part II,” which says more about the personal aspects of the Do-It-Yourself value of punk amateurism that any other song by any band (“Wait and See” by Stiff Little Fingers is maybe my second favorite). It’s also a punk song that even now can make me cry. Talk about a rare combination.

Could any other band have written anything with a title like “The Politics of Time”? And the brilliance of “This Ain’t No Picnic” lies partly in the fact that the concept of the group picnic, factory weekend or family based, comes directly out of the world view of San Pedro culture immediately around Minutemen. Side four opens powerfully: “Untitled Song for Latin America” followed by “Jesus and Tequila.” I’ve remained sad about the fact that the band’s 40-second version of Van Halen’s “Ain’t Talkin’ About Love” was removed from the CD. It was both a great critique of that other band’s pomposity but also a precisely distilled great version of the song. It’s a good thing I’ve kept the original record, with its Richard Petitbon drawings on the gatefold.

A crucial thing for me about this album though is that I’m a writer. And like many writers, I’m inclined to take the lyrics of a song more seriously than non-writers often do. Among musicians, I’ve long noted the split between those who care about lyrics and those who really don’t. Crucial to the appeal of Minutemen is the revolutionary combination of poetry and political awareness that marks their music as significantly writerly. And not just writerly. This band seemed, somehow, to understand not just poetry but also political theory and literary theory and to still sound like a bunch of ordinary working men yet also punk musicians.

I’m not going to copy in here the lyrics for “Political Song for Michael Jackson to Sing” but you can look them up.

There were a few precursors to this kind of lyric, of course. The Clash, obviously, although they tend to avoid anything that sounds too nakedly like an idea. Maybe more obviously, The Gang of Four, who similarly made clear that they could talk politics on the level of concept and theory that was a match for philosophy.

How did Minutemen manage to be both working class guys and theory heads and never look like they were doing any posing? It’s nearly a miracle. I can’t immediately think of any other band who was ever able to match or repeat it.

I can’t stress enough how they served as a model for who I wanted to be as a writer, someone who could understand and live in worlds of literature and theory without ever abandoning or thinking myself superior to the ordinary life going on around me. This band showed me that it was possible to illuminate the big problems I saw in the world without thinking of myself as separate from people or more special than anyone else.

I saw Minutemen live, only once, at the 9:30 Club in Washington D.C., at what I’ve tracked down must have been their January 3, 1985 show. It was a fantastic experience, with all the energy and spontaneity they were known for. I met and spoke briefly with D. Boon in the hallway entrance to the club afterwards. He didn’t disappear into the downstairs band room but stayed upstairs, chatting with people.

When he died, only 11 months later, in a van accident in Arizona at the age of 27 (that infamous rock and roll age), I was as shocked and saddened as most fans of the band. His life had been reckless only in the sense that he had taken a lot of touring road trips in less than great vehicles. Because he was sick, he had been lying down in the back of the van without a seat belt. His death didn’t at all come as some kind of pinnacle of rock star excess. A single moment of bad luck and bad choices and his life was over.

The other band members eventually carried on with various projects, musical and otherwise. A number of other releases of Minutemen material, all with moments of genius, would appear.

But the magically transformative moment of three ordinary young men making one of the most brilliantly poetic and political albums in the history of rock music was never going to be repeated, not by them. And really, on this level, probably not by anybody else.

Labels: 10 (Rock) Albums That Made My Sense of Music What It Is, Double Nickels on the Dime, Minutemen