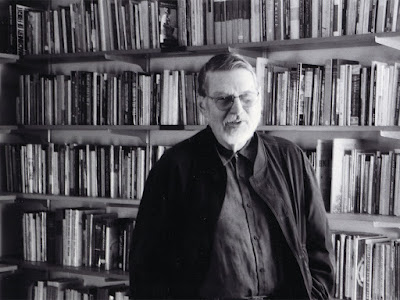 In Fall 1990, I was the graduate assistant for the newly formed Poetics Program at the University of Buffalo, working with Robert Creeley and Charles Bernstein. Charles had just become a full-time professor. I’d taken a course with him the previous year when he had been a visiting professor.

I remember a meeting that the three of us had at the house in Buffalo that Charles was renting. I recall a screened-in porch, a back patio, and a good-sized dining room. I was in the house several times. It was where I first met some of the poets Charles and Bob were bringing to campus, including Susan Howe (who would be a visiting professor in, I think, the spring of that year) and Leslie Scalapino. I also probably first met there the artist Susan Bee, Charles’ wife.

Charles and Bob and I were sitting around the big dining room table as they discussed business I don’t remember that must have been connected to working with the funds from their endowed chairs. They used those funds to bring readers to campus and to help students start publications, including three I would later work on: Leave Books, initially with Juliana Spahr and Brigham Taylor and later, with others like Kristin Prevallet; Poetic Briefs, edited by Elizabeth Burns and Jefferson Hansen; and eventually my own little poetry magazine Situation.

I don’t know why or how the subject had turned to the practice of art and poetry, but relative to whatever it was, I was saying to Charles and Bob that I had always envied musicians in bands, who got to work with others in making their art, as opposed to writers who in order to write had to be somewhere alone.

The subtext for me was that I often felt lonely in my graduate school years, even though I also craved alone time to do my writing. In fact one of the reasons I loved Bob’s poetry was that he could write about loneliness in a modern way that never seemed hokey or contrived. I had always admired the artistic camaraderie of my friends in bands like Nixon’s Head (Andy Rosenau, Mike Frank, Jim Slade and others). I’d traveled with that band a few times to shows they were giving and I always felt caught up in something exciting, instead of the experience of confronting the void alone and feeling like I was headed nowhere, which was a common experience for me as a writer. In 1990 in Buffalo I was still writing and publishing occasional music reviews. It would be another year or two before my poems started getting published in poetry magazines.

I’m guessing the context of the discussion must have been around poetry and community, a term much used at the time (and still) and which I had already earlier begun to explore. My first forays into literary DIY publishing had been in my earlier master’s program in creative writing in Binghamton, when in 1987 and 88, my friends Keith Eckert and Joe Battaglia and I had published little chapbooks, mostly of our own work, under the name Triangle Press. Keith had taken a poetry course with Jerome Rothenberg that helped start us down the DIY road.

So I was saying how I envied the artistic camaraderie of my friends in bands and had always wished to have that kind of creative experience more than my own, more solitary one.

Bob looked at me with his one eye glistening in a way I associated with him, an expression friendly and amused both that he often used. He said, “Yes, but a pen goes anywhere.”

What he meant, obviously, was that the advantage of the writer was that you didn’t need fancy equipment and money and the complicated logistics of band travel but could have your artistic practice available to you easily, anywhere, any time.

I never forgot it. Partly I think that was because Bob handed me in that comment some power I’d been denying myself in my belief that essential to artistic practice was something out there, in the world, something that others had that I didn’t and that I needed somehow to share in so that I wouldn’t be left out of whatever transformative power there was in being an artist and a writer. His comment helped me see that the power wasn’t out there, in communities of others, but in the very simplest things possible. Things right in front of me that I was already holding.

Happy Birthday, Bob, and RIP.
Posted by mark wallace at 9:12 AM