Sound Poetry in Belgium and The Netherlands 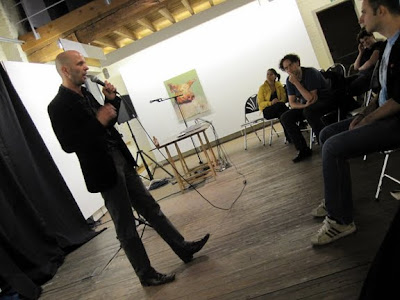 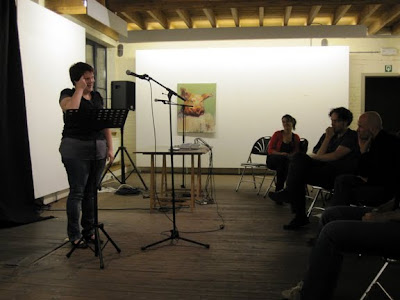 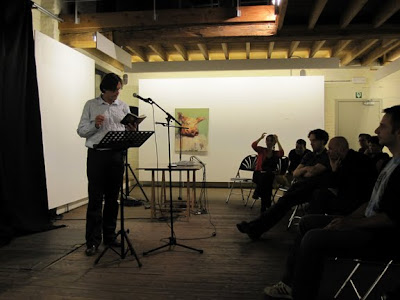 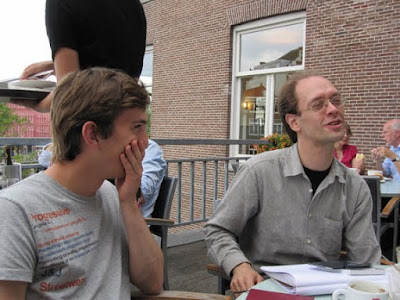 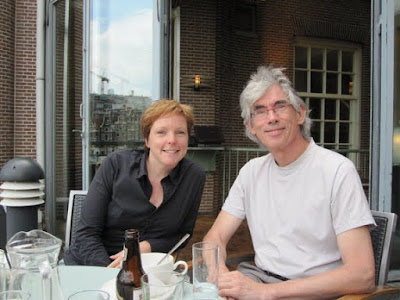 
One of the most interesting elements (if not entirely unexpected, given who we were meeting) of my reading and poetry tour with K. Lorraine Graham was the prevalence of sound poetry and sound poets in both Belgium and Amsterdam. After our reading in Ghent, we were given in the improv portion of the evening a performance of a number of poems that highlighted sound effects as an additional element to the words themselves or that dispensed with words entirely, replacing them with sound and gesture.

That evening opened a conversation about sound poetry that continued through our stay in Ghent and expanded when we went to Amsterdam. There, we met with Dutch poets (as distinguished from the international English-language poets we also met in Amsterdam, whom I’ll say more about later), Jaap Blonk, Rozalie Hirs, Samuel Vriezen, along with a younger protege Frank Keizer. They said they thought of much of what they did as being at least as much music as poetry, and they referred to themselves as musicians and composers as well as poets.

For a few years now I’ve been living in San Diego without an active community of writers that understands itself as a community (a scattered handful of creative writing professors transplanted from other parts of the country doesn’t quite a “community” make). In that time I’ve felt more and more in my many visits to different cities and their writing communities that I can distinguish a few regional features in most of the many writing communities I’ve visited.

It’s not accidental that I’ve discussed film and visual art with poets in Los Angeles, that poets in DC tend to see politics as part of the fabric of daily living instead of as a platform for polemic, that poets in Vancouver often worry about the relationship of the city to the region’s Native American heritage, or that innovative poets in Portland tend to see themselves as trying to move away from a tradition that, as Mary Rose Larkin said when we were there, historically emphasized “salmon and feelings.”

Before anyone attacks me here for generalizing, let me emphasize that I understand these are overall impressions, hardly ones that account for what every single poet is doing in every single city. They come from the environment of those places, ones that varying poets pick up or not to various degrees. While in Europe, I found myself considering what it was about Belgium and Amsterdam that made sound poetry a key element of non-traditional poetry in those places.

Of course it’s crucial not to go overboard here. Part of the reason Lorraine and I heard so many sound poems in Ghent was simply hospitality to visitors. The poets performing in Ghent understood that their visitors wouldn’t understand poems in Flemish and so some of them presented work designed to include us, although it was fascinating how easily I could tell the difference between the content of sound poems and more traditional lyric poems in Flemish simply by how they sounded. And as reading series host Helen White pointed out, the prevalence of sound poetry was also simply a function of the particular communities of poets with whom we were meeting. Obviously there are many poets in Belgium and The Netherlands who have no interest in sound poetry.

And yet, given all that, I still think that interest in sound poetry has something to do with the region in question, a place where multiple languages interact daily and the political and cultural issues implied by those languages have long been pressing questions.

Ron Silliman is fond of saying that all sound poetry really explores the same aesthetic question, which he calls “the excess of the signifier.” That is, sound poetry always calls attention to those aspects of language and vocalization which go beyond being merely words that provide identifications with things. It’s not so much that Silliman’s point is wrong than that it’s insufficient, a little like saying “music is organized sound” as a way of having the final word about what makes music interesting. As just one for instance in the nature of the problem, sound beyond words still does signify. Emotion, mood, pattern are just some of the ways that sound, like music, tells us something without conventional description.

In Belgium the train stations featured information in four languages, and the numbers of different languages in use by people moving through the stations were many more than that. Of course the fact that negotiating multiple languages is a fact of life in Belgium doesn’t mean that everyone speaks all the more common languages equally well, or that there are no cultural or political splits defined along language lines. The differences between the Flemish (closely related to Dutch) and French speaking portions of Belgium are only the most obvious of those splits and are partly what has made English a popular language among people in Belgium, especially younger, college-educated people. English allows Belgian citizens a way of communicating with each other that sidesteps cultural and regional bias, even while the growing international power of English remains an issue.

One advantage of the sound poem in such an environment is therefore not that it’s incomprehensible because it doesn’t use words, but that it’s comprehensible, almost to everyone. It doesn’t limit your work to the Dutch, French, English, or German speaking portion of your audience. Precisely because it relies on the emotive and structural qualities of sound and doesn’t use words, it’s cross-linguistic. Of course the meaning of sound is not universal, an obvious enough fact that Jaap Blonk’s theoretical work has explored in detail, but nonetheless it allows for some level of communication across languages that speaking to each other in different languages doesn’t

Blonk remains the most well-known of the sound poets we met, and was clearly much admired by many of the younger generation of writers I spoke with. His theoretical work has been globally rigorous in exploring the sounds created by multiple languages and the physical actions necessary to create sounds. His performances often feature interaction between sounds made in different languages, always in striking juxtaposition. CDs and other recordings by Hirs (who a few months back had actually been in San Diego and gave a performance sponsored by the UCSD music department; who knew?) and Vriezen ( see http://www.xs4all.nl/~sqv/ ) have also been providing me with fascinating post-trip listening.

In Ghent, before going to Amsterdam, we were treated to many different kinds of sound performances. Xavier Roelens gave a very funny performance of two words that took his in-character narrator a long time to finish saying. Jelle Meander performed a piece highlighting certain sounds of morning in Ghent. Tine Moniek performed a piece called “Tsunami” that, while we didn’t know what specific kind of tsunami her poem literally was about, followed the tsunami’s development sound-wise. Olaf Risee performed several lively poems that might well be considered Dutch slam-poetry. And Philip Meersman also performed a poem that was not technically a sound poem but that solidified my impression about the relation between sound poetry and cultural context. His poem was in six different languages, not all of which were known to any single person in the room except for him, with the result that at least some portion of his poem was only a sound poem for every member of the audience. It wasn’t meant as a display of language virtuosity, though it certainly was also that, but as a very pointed exploration of what it means to be able to understand other people or not.

The fact that sound poetry seems in tune with the cultural context of Amsterdam and Belgium hardly means though that such work is any more widely accepted there than it would be in the U.S. All the younger poets we met had a great deal to say about the difficulty of finding forums to publish or perform their most inventive work. Meersman, for instance, asserted that he wasn’t aware of a single poetry publication that would publish a poem in six languages. Are there maybe a few poetry publications that might prove his assertion wrong? Possibly, I told him, but I couldn’t say for sure. And interestingly enough, in one of those sudden role reversals that happen often enough in the world of poetry, one of the most successful young poets in Ghent, Lies Van Gasse, whose book I saw for sale in Amsterdam, didn’t read any poems. She said she didn’t think she could perform them well in a context so devoted to highlighting performance. Shyness in a writer, I suppose, has a difficult time when surrounded by boisterous sound poets.

I met many other poets on the trip, with whom I had many fascinating conversations, and I’m sure I’ll blog more about them later. For now, though, it’s safe to say that the sound poem portion of my trip was one from which I learned a lot. It was a pleasure, for awhile, to be in the company of innovative poets and performers for whom the all-too-commonly mentioned camps and theories of U.S. poetry were not the heart of the matter and also somehow transformed.


For further accounts of this trip, see Lorraine's blog Spooks by Me:

And for some further related material: 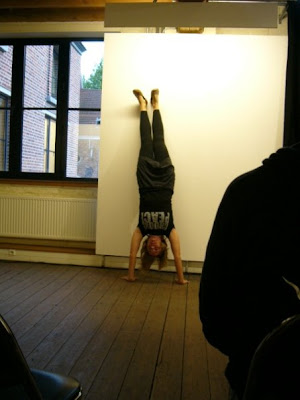 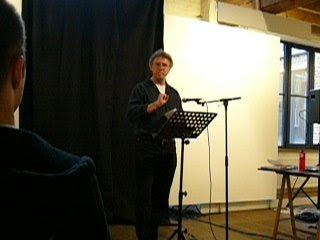 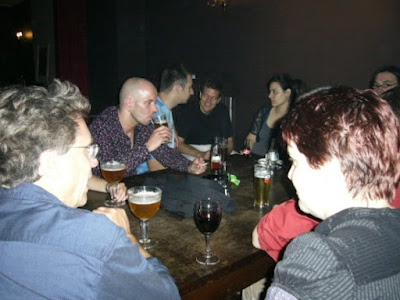 Cralan Kelder, French Pastry
night falls and is slow to get up
Lemon Red

Eliza Newmann-Saul, Excess
The Precarious State #1: Everything is Equally Familiar

Also, check out these online recordings by Samuel Vriezen: