My Readings in Portugal and Galicia 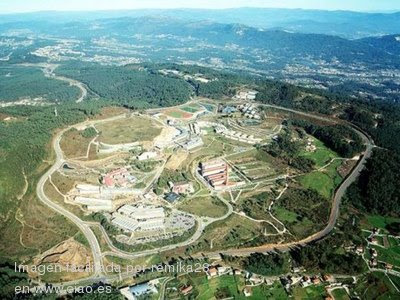 If you just happen to be in Portugal or Galicia (northwestern Spain), I´d be as surprised about that as I would be about your ability to attend my readings there. But who knows? You can't make it if I don't invite you, so consider yourself invited.

On Friday, October 1 (time still to be determined; I'll update as I learn more), I'll be reading at the University of Vigo (seen from aerial distance; second picture) in Galicia, the northwestern edge of Spain, a region which has a very different history than the rest of Spain and sees itself as very much its own separate place. The University of Vigo is a new and highly energetic university and has a well-informed faculty very interested in contemporary literature. I've never been there before and I'm excited to be going there.

I'd end by saying that I hope I'll see you there, except that seems unlikely for most of you. So instead I'll say, so you there or somewhere else, some time soon, I hope.
Posted by mark wallace at 1:20 PM No comments: