A 17-year old white supremacist killer loose in the streets with an assault rifle isn’t just born; he has to be made. It’s not nature, it’s nurture.

Some or all of the following features also have to be in place:

Parents and other family members and caregivers who are racist and who encourage the use of weapons OR who are in the dark about their child’s activities OR are unable to do anything about it or get any help regarding it.

Media groups and social media groups promoting white racism and who directly or indirectly in various degrees advocate that it’s okay and even good for white people to take up weapons against non-white people. Decades of such media groups have helped raise new generations of violent white supremacists.

Racist neighbors who often share around the neighborhood their attitudes and the information they have heard on media supporting those attitudes.

Easy availability and access to high-powered weaponry for private citizens.

A peer group of others who encourage each other and share behaviors and attitudes. It never hurts to have a few good pals egging you on to kill people! One of the great things about social media is that it helps people find like-minded others.

People in positions of prominence in business and government and news who passively or actively encourage racist hate. It never hurts to have power on your side, and if that includes the President of the U.S. and a prominent political party, how cool is that?!

Higher ups in law enforcement who themselves might be actively involved in white supremacy or who encourage it through their actions or speak up in ways that seem to support it.

A minor who is just twisted and abandoned or coddled enough to actually follow through on what many people around him have encouraged him to do and try to make himself a hero by killing people who have done nothing to him or to anyone he knows.

Posted by mark wallace at 8:22 AM No comments:

The French Face of Edgar Poe 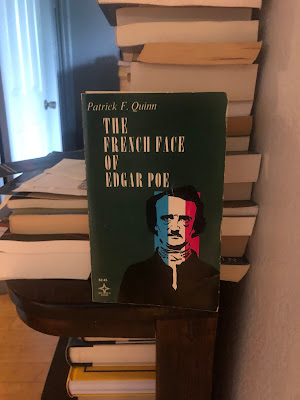 I sometimes enjoy reading outdated books of literary criticism because I find myself learning more from them, sometimes in unexpected ways, than I do from contemporary literary criticism, whose concerns I find more predictable. It’s not that older books of criticism were more freewheeling in their approaches; it’s just that the expectations of my own time period are more apparent to me. The jolt of strangeness that comes from historically bypassed points-of-view often allows me to think about a topic in (for me) an unexpected way.

The French Face of Edgar Poe by Patrick F. Quinn was published in 1953 and has been republished a number of times since, with the last version appearing in 1975 as far as I know. Quinn wrote at least one other book on Poe and edited a number of additions of Poe’s writing. My version contains acknowledgements that he wrote from Wellesley College in 1956.

Quinn is writing in a context in which he takes it for granted that American literary critics and scholars don’t consider Poe a serious writer of literature. In fact Quinn himself admits he started his research for this book with much the same perspective. How could it be that so many excellent French writers, Charles Baudelaire above all, have taken Poe to be a serious writer when all smart American critics know that he’s just a creator of cheap illusions and manipulative thrills? Quinn writes that over the course of his research he learned to his surprise that the reason so many French writers have lauded Poe is because Poe actually is a great writer. Who knew?! Not American literary critics as late as the 1950s, obviously.

The book tells the interesting story of the self-identification with Poe made by Baudelaire (who, Quinn assumes, all American critics think of as a great writer), followed by Baudelaire’s work translating Poe and his attempt to make Poe a well-known name in France. Sometimes Baudelaire’s promotion of Poe worked and sometimes it didn’t, but eventually it led to a greater acceptance of Poe’s greatness by the French.

According to Quinn, Baudelaire was never able to articulate in worthwhile critical terms what he so admired in Poe. His comments remained mostly on the level of identifying himself and his writing with Poe and asserting Poe’s greatness to others. In fact, according to Quinn, it wasn’t until Marie Bonaparte’s two-volume study Edgar Poe was published in Paris in 1933 that some worthwhile critical reasons were finally established in France to define Poe’s greatness.

And those reasons were ? Wait for it. Bonaparte seems to have recognized that Poe had fascinating insights into… human psychology! Only they might not have been insights exactly, Quinn writes, since Bonaparte treats Poe and his writing mostly as a psychological example and thinks of Poe’s writing as more or less autobiographical. Poe’s writing according to Bonparte might be considered largely a symptom of his problems in life.

The idea that literature presented psychological interest, especially any interest having to do with the field of psychoanalysis, was not something that American critics were apparently prepared to admit in the 50s. Quinn’s ironic comment describing this becomes filled, in the present, with ironies that Quinn never anticipated:

“In his review of the (Bonaparte) book, Edmond Jaloux called it the most important critical study of Poe ever written in France. And he added the interesting qualification that this holds true quite apart from the veracity of the particular psychological theory which Mme Bonaparte employs.

“Thus he forestalled a common objection; for the theory employed is psychoanalysis, and when that word comes up in a literary context it is usually considered good form to knit one’s brow and show signs of impatience. Often enough, perhaps, this stock response is the right one” (20).

In other words, in the eyes of American critics, if Poe only becomes of interest through a psychoanalytic approach, and psychoanalysis is really more or less a joke, then Poe can hardly have written interesting literature. But that argument fails if Bonaparte has still made important points about Poe even though her theoretical perspective can’t be taken seriously.

Psychoanalysis is ludicrous and yet, somehow, something interesting about Poe still results from using it.

75 years after the publication of The French Face of Edgar Poe, American literary scholars are still often skeptical of anything that seems too psychological. The American way highlights the movements of exteriors.

Quinn’s book goes on to explore the effect of Poe in France through several methods. He looks at the ongoing history of French critical response to Poe, with an eye out for the ways that the criticism might have falsely inflated Poe’s reputation. He details the history of Baudelaire’s translations of Poe and examines in minute detail the ways in which he thinks Baudelaire’s translations might have altered Poe and made the French translations superior to Poe in English. As it turns out, Flinn thinks some of Baudelaire’s word choices were improvements on Poe’s originals but others were less effective. Thus, he concludes that Poe in Baudelaire’s translations is on the whole no better than Poe in English. Quinn also looks for the reasons that Baudelaire strongly identified with Poe and finds some key biographical similarities, primarily struggles against a wealthy foster father and a feeling of being betrayed or abandoned by their mothers. Both also faced terrible financial struggles and died young (Poe at 40, Baudelaire at 46).

Quinn tries his best to be scrupulously honest in examining the possible arguments that the French have been wrong about Poe, but he comes to the opposite conclusion. The French, he writes, actually had good reasons often for admiring Poe. And therefore the reasons that American critics have often dismissed the greatness of this American writer turn out to be not defensible.

Defining and defending Poe’s greatness to American critics on the grounds defined by French writers is really the heart of the book. Quinn wants Americans to know that Edgar Allan Poe did in fact write some great works.

Poe’s poems aren’t very good, Quinn says, and many of his tales aren’t very good either, but the best ones are fantastic and create a whole new approach to characterization, one that focuses on obsession and doubleness (doppelgangers). It’s fascinating, Quinn thinks, that Baudelaire essentially considered himself something of a doppelganger of Poe. Baudelaire thus played out, in his life, one of Poe’s key themes.

The later chapters of the book, in which Quinn does a close analysis of some Poe works, are not that interesting, or at least not to me. He provides a precise look at details in Poe’s stories through what now seem either obvious or outdated (take your pick in many cases) assumptions. Still, Quinn seems to have been one of the first American scholars to analyze Poe’s novel The Narrative of Arthur Gordon Pym in much detail. He places the work aside Melville’s Moby Dick and comes to the conclusion that there are many similar approaches and themes, or at least ones that can be juxtaposed fruitfully. His underlying point: if Poe and Melville have worthwhile similarities, and American critics love Melville and hate Poe, then they must be wrong about Poe.

One insight that I did find quite useful even now is Quinn’s idea that Poe’s works are poised often on the boundary between dream and reality, living in neither one fully but veering from one to the other without ever quite occupying either. It is Poe’s exploration of dream life, Quinn says, that makes Poe an important precursor to French Surrealism (254-55).

What I learned most from this book was more about history, including the history of literary criticism, than anything about how one might do literary criticism now. The book shows how Poe became considered the way he was in France and why American critics and scholars dismissed him. Quinn’s book is part of that history: he positions himself to be the American scholar defining the greatness of Poe in a way that American scholars will have to accept.

I wanted to write this piece partly because the old paperback version of this book I had fell apart while I was reading it. In a house that has too many books, this one isn’t such a classic that I need to keep it. But I did learn enough from it that I wanted to write about it. That alone proves to me the value of the book, however much its assumptions belong to a critical environment that has vanished.