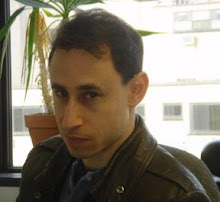 If you're out of college now, or were never there, and are still thinking that you want to become a writer, here's some great advice on how to do that from Daniel Gutstein, poet, short story writer, and playwright.

Current and former students of mine should definitely read what Dan has to say.

On Blogging and Much Else: Women Who Write Poetry Criticism (Roundtable)

If you’re a student or former student of mine who has asked me about blogging, this discussion, featuring some of my favorite writers currently working in North America, is essential reading. It’s also essential reading for anyone interested in blogging, writing about literature, or gender. And people who think they’re not interested in any of those things would benefit from reading it too.

Janette Kim Larson and Mark Wallace: On Teaching the Poetry of Catherine Wagner 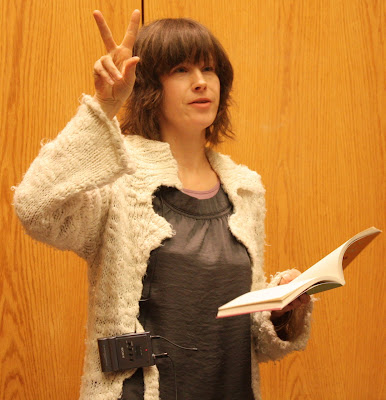 Janette Kim Larson, a former student of mine and a fine poet, is doing some research on contemporary poetry and asked me some questions about the work of Catherine Wagner (pictured above), with particular emphasis on the experience of teaching her work in the university classroom.

You can check out a recently published poem by Janette here at splinter.generation.com:

And here’s our discussion:

JKL: How did you first discover Cathy and what was so striking about her work to you?

MW: It’s funny that you use the word “discover” (although not surprising) because I didn’t discover her work at all in the way that the word is usually meant.

I organized a literary reading series in Washington, D.C. from 1995-2005, The Ruthless Grip Literary Series, named after the experimental art gallery and artist co-op, Ruthless Grip, where the series was located for its first five years. The Ruthless Grip reading series, along with other D.C. reading series at Bridge Street Book and the DC/AC Arts Center, were and are known (all three still exist) for their focus on avant garde and various aesthetically and culturally extreme literature. That focus contrasted greatly with the more mainstream approaches found in the universities.

Cathy was quite a young poet (I wasn’t that old myself) when she wrote me in the late 90s and asked me for a reading in the series both for her and her husband at the time, Martin Corless-Smith, also a poet. I don’t think I’d heard of them, but Cathy had grown up in Baltimore and some of the poets I knew were aware of her work. This was several years before her first full-length book, Miss America, came out, but I think she had published a chapbook of the magazine poems that reappeared in Miss America. And Martin’s first book, Of Piscator, was either already published or came out shortly thereafter. They both gave a good reading, and there was the usual sets of poetry conversations afterwards, since a lot of writers came to those events and everybody would stay together talking for some hours. Since then, Cathy and I have been in touch many times about all sorts of literary matters, readings and conferences and so on. I invited her out to Cal State San Marcos to read in April 2007. It has been great to see her work continue to be published and to get more attention, which it deserves.

JKL: Why did you decide to include her work in a grad and undergrad contemporary lit seminar (513)? If you have assigned her elsewhere, please let me know where and why?

MW: I teach Cathy’s work quite commonly in my grad/undergrad cross-listed contemporary literature course, and I’ll be teaching it again this fall, although in the context of her work and the work of others that appears in the recent anthology Gurlesque. And I taught Miss America once in an undergraduate poetry class at American University in Washington, D.C.

Cathy’s work is rather uniquely well-suited to the needs of the students that take 513, I think. Of the full range of poetic approaches at the moment, hers is hardly the most extreme. In a time when many poems switch subjects rapidly, or undermine and critique in numerous ways the idea of a central subject, Cathy’s poems are still mainstream enough to be recognizable to students unfamiliar with contemporary poetry, simply because they often have identifiable subjects (a young woman dealing with love, or motherhood, or buying a house, etc.) commonly recognizable as archetypal American middle class and women’s issues. No all her poems do that, and some of the poems in her most recent book, My New Job, maybe veer farther away than ever from having unified central subjects, although the job is of course archetypal too.

At the same time, Cathy’s poems avoid and critique more expected ways of looking at their subjects, and she has a consciously jagged and often staccato approach to language that gives her an extremely unique style. Her poems in Macular Hole, for instance, displace the idea that human emotions are at the center of having babies and buying houses and much else. Instead the poems explore the physical and social structures that shape emotional reactions. A mother and baby have bodies that act as bodies and need to be recognized as such rather than swaddled in sentimentality, especially since sentimentality often becomes a way of ignoring and denying the kinds of problems that mothers face. This approach leads Cathy often to use more clinical language than expected in mainstream poems, and shows emotion as being conditioned by social structures rather than simply sweeping those structures aside.

The bluntness of her language is not simply an emotional bluntness, although her poems have those moments also: the bluntness raises the issue of what kind of language people use when they speak about human bodies, and women’s bodies specifically. And the playful and purposeful complexity of her word choices leads to poems that never quite present these issues with easily transparent representational imagery. Instead, the focus moves in and out and approaches the subject at many odd and yet ultimately insightful angles. She manages to make archetypal subjects strange again, and through that, reveals important issues that have often been covered up or overlooked.

Add it all up, and her work operates on an edge between mainstream and more extreme avant approaches that is very helpful for me in leading students away from conventional expectations about the language and subject matter of poems, while giving them enough grounding in familiar subjects that they don’t feel lost. From there I can I send them on to even more extreme poems. In that way, her writing is not only fantastic on its own but serves well as a gateway to the variety of challenging aesthetic approaches available in contemporary poetry.

JKL: How do students typically respond to her work? Are they horrified by her stark honesty? Pleased by the boldness in her voice? Confused and frustrated by lack of accessibility? All of the above?

MW: Teaching would be a lot easier if there was any typical student response to anything. Certainly her work has caused all of the reactions you describe, but I also have students who feel liberated by her stark honesty, upset at the boldness or bluntness of her voice, or excited by some of the difficulties her language creates. Some people read her work and are really energized by it; to others it’s just an assignment that they want to get over with. I’m happy of course when students like the work I’m teaching, and I hope my enthusiasm for that work gives people reason to believe that enthusiasm about poetry really is possible. Ultimately what I want is for students to be able to talk and write effectively about the poems I teach. When people can articulate what something is, they become more likely to be pleased by their relationship to it.
Posted by mark wallace at 11:41 AM No comments: