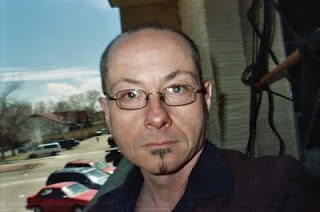 I really enjoyed the complex, playful, sometimes impressively contorted rhythms of Mark Ducharme’s recent book of poems, Answer, published by BlazeVox. Those rhythms combine well with the book’s rich and frequently surprising vocabulary. While some lines in the book are bluntly political, more often the poems create a moody and shadowed (yet somehow also deadpan Midwestern) romanticism, one in which clarity of thought and action repeatedly finds itself deflected by misunderstanding and uncertainty.

Ducharme spins and alters the music of his lyrics in as varied a way as any lyric poet working at the moment, without ever losing their basic melodicism, as in the opening of “Imperfect World”:

Stilled along the
way, to where
It is, we are going. Where is it, we
Are going

anymore? Only to where
In a moment, I’ll reappear
Ambiguous & startling
In your hair, replete, where I do not

Melancholy, satirical and bemused by turns, the poems feature tight torques, subtle ellipses and, given their refusal to embrace too much drama, a surprising degree of lyrical grandeur.

Ducharme is neither a writer of conventional lyric phrasing and imagery, nor of Stephen Burt-named New Thing minimalism, although his work sometimes veers in and out of both tendencies. The poems in Answer take more risks than most lyric poetry of the present day, given many unexpected leaps in phrasing and Ducharme’s willingness to stretch language to the point that, often, meaning nearly breaks down entirely.

At times the metaphorical deflections of any too direct subject matter give the poems a sleight-of-hand that delays or withholds, usually in fascinating ways, any too easy definition of a given poem’s subject. The result is that many pieces become moody plays of visual tones and twists of sound. Yet if the book threatens maybe too often to float off into a soundtrack-like aura for a dead-ended, befogged Middle America where nobody knows anything or anyone, the language can also jolt abruptly into directness, even as it retains its quick turns, such as in these lines from “Thank You For Protecting Polar Bears”:

The centaur cannot fold. It has a new life experience
as seen on Lifetime, where, punctual
You are a modernist in a doomsday client
State—suppressing all legible offers
To become someone who cannot hum
I am reasonably sure this is private, & has
Only minimum content appeal
I am still not kidding (33)

The book is full of numerous highlights, including the section of “Crisis Sonnets,” the sudden leaps intro more extreme avant word play like in the poem “Glutton Tongue,” or the direct simplicity of the repetition in “Possible Ode.”

There’s a tendency in the book to overuse a few constructions, like replacing a direct image with the phrasing “of what,” as in the lines, “like their use at night/In the where of what can quickly swerve” (“There is Something Original About This Message”, p. 45), a construction which appears again later in the same poem and numerous times elsewhere. Ultimately though, Answer is a collection of poems that asks many significant questions and is never afraid to reformulate language in ways that will best explore or, more often, deny the answers. As it turns out, according to Ducharme, too many of the answers people willingly accept are just too easy.

Posted by mark wallace at 8:04 AM No comments: 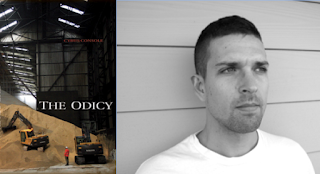 In recent years, the idea that many different aesthetic approaches can be considered to have innovative or experimental possibilities has opened up to include all sorts of approaches that, a decade or two ago, might have been dismissed out of hand as too traditional. Given that, I imagine that it was inevitable that sooner or later, a English-language writer was bound to “return” to iambic pentameter and see if new things could be done with it.

Enter Cyrus Console and The Odicy, a book-length poem in five parts, all written in variations on pentameter. The book’s back cover claims that The Odicy is a detailed attempt to “take the measure of our epoch’s cultural and ecological crises.” I don’t actually know how experimental Console imagines his take on pentameter to be. At times the book seems to be trying a genuinely unique approach, dunking the frequently high-toned pentameter in colloquial phrasing, social satire, and moments of bathos. At other times the book comes across as overly restrained, in tone if not in subject matter, with a use of pentameter that seems more conventional and almost even reverential.

Frequently, Console’s lines, with interestingly tight enjambments and torques, have a casual colloquial tone that undermines the tendency of writers of pentameter to drift towards loftiness: “Go now, Tony. Else you got to stay/ Tony. Fix a stocking to the chimney/ Decorate a tree this holiday/ Artificial is the only way to fly” (15). Perhaps just as often, the book seems to succumb to the temptation of just that sort of loftiness, occasionally with a significant degree of abstraction: “The littoral uncertainty in being/Neither continent nor boundary/ Unflixed measureless intermittent/ Crush of water macerating what/ On or near the day we lose the beachhead” (34).

The subject matter of the book wanders from idea to idea in a way that is frequently intriguing but sometimes too distant or general. The references to contemporary commodities like soda are often more vivid and memorable than the book’s philosophical framework, and by the time I reached the end of the book, its overall stance seemed a bit removed from its subject matter. Intentionally or not, the way pentameter is being used in The Odicy feels like it contains as much cultured disdain as satirical critique of the frequent absurdity of day to day life under capitalism. Whether readers will find that effective depends a great deal on how attractive the book’s shifts in tone feel to them.

I was impressed by the ambition of The Odicy. Console is a writer with big goals, both in terms of writing a book length poem and of the wide range of culture and philosophical problems addressed in it. As his work moves forward, it will be interesting to see whether and how his conception develops regarding the relation between subject matter, form, and tone. He’s trying things in The Odicy that are risky and worthy of admiration.

The result, to my mind, is a long, bold and uneven poem that is perhaps bogged down at times in the historical role of pentameter in English-language poetry. In theory, there’s nothing about pentameter that requires a high-toned grandness, but in practice The Odicy echoed that tone too often to feel fully effective. Still, Console is exploring and developing an approach in this book that many other poets would be too timid or conventionally unconventional to try. It’s important to keep in mind that when ideas about the experimental become too narrow or expected, those ideas stop being experimental at all.
Posted by mark wallace at 9:23 AM 1 comment: