If you're in Detroit on Thursday night

Please click this link for further details.
Posted by mark wallace at 3:45 PM No comments:

I really hate to break up with actual details the barrage of right-wing manipulative hysteria, but just in case you're a person whose political ideas might involve caring about facts, here's a good article on the subject of how state worker pensions are affecting the finances of U.S. States. Happy reading. 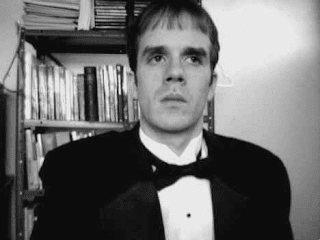 With its not-at-all-as-dumb-as-I-sound slang, all elbows humor, and pseudo-historical research, Adam Robinson and Other Poems, by Adam Robinson (pictured above), is as fun a book of poetry as I’ve read in awhile. The poems in this book (published by Narrow House) make some use of google searches in a way that recalls both Flarf and Conceptual Writing without being either. Reminiscent of a New York School matter-of-fact-poet who has gone on a consciously ironic self-aggrandizing bender, Robinson consistently and playfully puts a sense of personality center stage. The poems have a wide range of reference that they handle wryly and about which they seem to ask, in an undergraduate drunken slur, “Am I going to be tested on this?” A big plus: This book has the first poem I’ve ever seen about Judas Priest, and it’s good. From the poem “Frederick Law Olmstead”: “He didn’t go to college because sumac poisoning messed up his eyes!/He thought slavery was bad business and wrote about it when he was a journalist/Also he was like a Red Cross guy in the Civil War/He designed the park system in Milwaukee and Buffalo”


Although its title suggests a potentially exaggerated poetic sensitivity that doesn’t appeal to me that much, Louise Mathias’ chapbook Above All Else, the Trembling Resembles a Forest (Burnside Review Press) turns out to be full of subtle poems with precise, understated twists of line and subject matter. These are minimalist elliptical poems, creased by hints, suggestions, and not-quite-hidden implications that purposefully never cohere around clear central stories, although love, alienation, abandonment, danger and violence are frequently invoked. Mathias contrasts an emotional fragility, one that in a few moments feels a bit forced, with lines of blunt physicality that effectively evoke never-quite-seen brutality and an always present sense of fear. “If you ask me to loosen my grip,/ Consider the source—/My father put his right hand through the glass.” If some of the scenarios suggested in her poems run the risk of seeming too expected, what Mathias does with those scenarios is always precise and unique.


Clay Matthews’ Pretty, Rooster (Cooper Dillon Books) is a strong series of sonnets notable in their understatement and their ability to make the casual and ordinary seem significant. The chicken art, in the cartoons that frame the collection and the flashbook that runs through it, gives some whimsical pseudo-down home flair to the deadpan humor. The repetition of the last line of one poem as the first line of the next poem was often memorable, although the method starts and stops somewhat randomly. Although no one is going to call this a significantly intellectual book, a convincing world view and philosophy does emerge, one involved in the maintenance and care of the particular. “I wash the gutters, try to patch the house/ together with some caulk. I can’t say that/ without you laughing. That’s how words run south/around here. I feel today I want at/ least to say something beautiful. The dog/licks his leg and we are alive.”


I liked Laura Cherry’s Haunts from Cooper Dillon Books best in its more biting, satirical moments (“Surely your next move/will be a twenty-one bagpipe apology,/with you in a hot air balloon high above/reproach, flaunting your star-spangled manner”. Many of the precise descriptions of character were also revealing and memorable. At times the tendency towards quiet understatement (there’s even a poem titled “After Li Ch’ing Chao) was very evocative and affecting, while at other times the drive to be evocative and affecting seemed overplayed in the context of not always inventive subject matter and situations that didn’t seem as emotionally moving as the language wanted them to be. While the satirical metaphors were often fantastic, other metaphors seemed strained or too conventional in their phrasing (“when I go there/like a butterfly on a pin/of narrow want”). Still, at their best moments (and there were many), these poems effectively highlighted the subtle absurdity and often unarticulated pain of contemporary Americans stunned by their own complexity: “You’re dead and I’m here with your ex-wife. Stranger things have happened, but this one/didn’t occur to me before it occurred.”
Posted by mark wallace at 8:56 AM No comments: