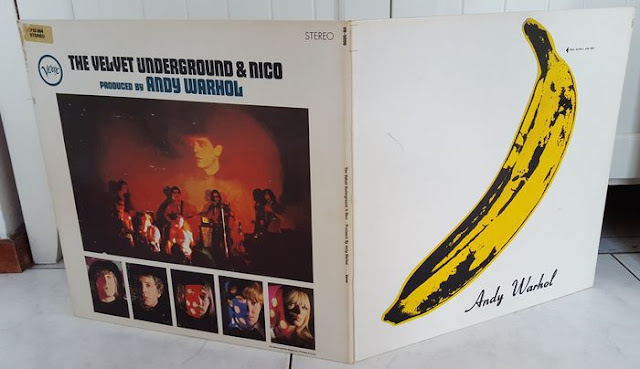 The problem with best-of lists is that they’re almost always exercises in what has become called “virtue signalling.” They’re defenses of of the good taste (however defined) of the person making the list or of some other virtue (good politics, often). I’ve been trying to tell the truth as I remember it of my experiences of growing up with music. So my virtue has been that I’m telling the truth however pleasant or unpleasant it might be and whatever trajectories it fits or doesn’t. But I guess I’ve also been feeling secretly “virtuous” that my list shows both my stubborn independence of taste growing up in music, my commitment to art over entertainment, and also my openness to being influenced by others.

I wanted to avoid putting this record on my list. Liking it so clearly signals trying to participate in the cool alternative underground of rock and roll that it’s a cliché. But if I’m telling the truth, it can’t be avoided. Like nearly every American literary and art and musically-inclined young man (obviously, I won’t speak for women) I’ve known, I thought this album was totally cool.

In defense of my virtue (ha) though, at least I had to work to find the music. I’m not from New York City. I came to my interest in the album at a strange moment in music history when the albums of the Velvet Underground were, as has been often noted, entirely out of print in the United States. I didn’t come along in the first wave of Velvet fans, and it wasn’t until the later 80s that their music was easily available again. One of my college music friends or other must have introduced me to this band; if you know who you are, speak up. I don’t remember how I found my own copy of the album. It didn’t have the gatefold cover. It was just a cheap reissue that I got rid of long ago.

However I came to find it, there’s no doubt that I played The Velvet Underground & Nico over and over again, side one especially of course. It was still the era of albums and album sides. I played the second side quite often too.

One thing about this version of the Velvets, something that I noticed then and now, is that there are many ways that their makeup is like two other groups on my list, The Jefferson Airplane and Fairport Convention, even though their sound is entirely different. A loose ensemble of serious rock-oriented musicians willing to step outside the mainstream and take on daring, experimental rock structures; a prominent, quasi-independent female singer with a startling and unforgettable voice and who writes brilliantly original songs; inventive and daring songwriting by multiple people, with different singers taking the lead on different songs.

I remember reading some years ago that the Velvets and the Airplane disliked each other when they met. I can see why. Look at the combination of similarity and difference in the sound and the regional differences in personality. Dark NYC / European brooding historically-informed experimentalism vs. darkly playful San Francisco folky amateur experimentalism; an angry, interior vision of decadence, doom, addiction and collapse vs. an angry, extroverted explicitly political revolutionary communalism. What would these bands have hated more about each other: what they had in common or what they didn’t?

It’s yet another album about which the songs have been talked to death. Still, “Sunday Morning” opens the album with a medium tempo number that’s both sweet and slightly jarring and describes greeting the empty early morning city streets with a distraught life behind you that might creep up on you again at any moment. If Jefferson Airplane is about reaching for the future, the Velvet Underground is about being mired in the past. Or, frankly, being chased by it.

“I’m Waiting for the Man” is, like pretty nearly everybody knows, just about the coolest song ever recorded: the relentless groove; the instruments grinding and popping out of the mix in an aura of remarkable presence; the “just another ordinary day waiting to score drugs” perspective that doesn’t try to prove it’s cool. The narrator is waiting to buy drugs like the rest of us are waiting to go to work. I don’t think it’s accidental that the metaphor of “The Man” applies both to drug dealers and to corporate bosses. Those under their thumb are exhausted and have to pay up with blood, sweat, and tears.

And it’s not until after those two songs that Nico even enters the scene. Then she does, on “Femme Fatale,” in full doom goddess image and deep, deeply feminine voice, filling the listener (of whatever gender perspective, I would think) with both fear and desire. On an album full of death drive songs, this is the song that’s most powerfully about the seductiveness of destruction (and the destructiveness of seduction). Has any other song ever captured that as well?

Okay, here goes: I have to admit it. “Venus in Furs” is this album nearly doing a parody of itself, and yet at age 20 or 21 I loved it so much. It felt like I’d been waiting for this song for years. The sadism and masochism and doom connected well to my upbringing in the doomier side of heavy metal. The modernist European decadence appealed to my literary side. Plus, the romanticism on display in the song was something the younger me wanted to grab and hold onto. There’s a whole alternative world in the song, its values not so much opposed to mainstream values as they are exploring the dark underground of a world defined by those values. The Marquis de Sade, by the way, is not opposed to dominant aristocratic values. His writing takes those values and pushes them to their logical limits, the desire to inflict pain on others because of the pain in ourselves that we secretly or not so secretly enjoy.

“Run Run Run” is yet another version of “I’m Waiting for the Man,” in a sense, making the need for escape from the man, and its impossibility, clearer. It’s a step further along the junkie continuum, like getting to hear the song twice when it’s an entirely different excellent song, almost like, later on, “I’ll Be Your Mirror” is the tender side (pseudo-tender maybe? isn’t it just a little creepy?) of “Femme Fatale.”

Similarly, the two grandest melodramas on the album, “All Tomorrow’s Parties,” which used to be the end of side one when albums had sides, and “Heroin,” which used to be the start of side two, are also songs which form another kind of mirror of each other, back-to-back “Let’s compare how our destruction will go” numbers. Both melodramas push past logic and reason to their inevitable conclusions.

In “Parties,” Nico chronicles the dismal wind down of a life of empty elite glamour and pleasure and decadence, with the longing for stylish romance revealed as the final empty lie. It’s Lesley Gore’s “It’s My Party” playing on repeat until the possibilities of the character go the way of all things, which, in case it’s not clear, is according to the Velvets exhaustion and death.

On “Heroin” the character Lou Reed creates embraces death more directly. Addiction is wrapped up in the life of a city that turns out to be the story of a death drive in perpetual motion. You want to know what dystopia sounds like? This is it, the sound captured in the ebb and flow of the discordant music in an ever growing crescendo, the city as murderous hellscape, Metropolis + 1984 + Blade Runner.

About the controversial end of the album: it’s true that “The Black Angel’s Death Song” and “European Son” are what other music friends of mine called “needle lifters,” the kinds of songs easy to skip, especially once you know an album. I’m not going to try to make a case for these sound experiments as more interesting, on their own terms, than they are, although I can imagine they would have been very fascinating to hear live. Still, I think the sound experiments on the next Velvet’s record, White Light White Heat, are for the most part more enjoyable and successful.

What I will say in favor of these songs, though, is that they were a big introduction for me to the idea of music as atonal noise. Shortly thereafter I would also be listening to the atonal noise of later John Coltrane records, and Ornette Coleman, and within a few more years the whole jazz avant garde. There’s no doubt that these two songs paved my way for understanding those sounds as “music” (another band I discovered not long after, Pere Ubu, would take me even further in this direction).

Soon enough I owned the first four Velvet Underground records, several on what we’re probably pirated European imprints. Not that long after, with the 1985 release of what was mostly a “lost album,” V.U., and further odds and sods in the 1986 release Another View, the band was back on its way to being in print. The several years of underground virtue I might have bestowed on myself for loving this band turned quickly into part of the biggest pile on of “cool,” “alternative” and “underground” fans in the history of rock and roll. All these people defined their uniqueness by liking the same exact thing.

But if loving this band is now about the most obvious marker possible of wanting to find and celebrate rock and roll outside the mainstream, the fact of the matter remains that at least the band is worthy of precisely that level of acclaim.
Posted by mark wallace at 7:45 AM No comments: