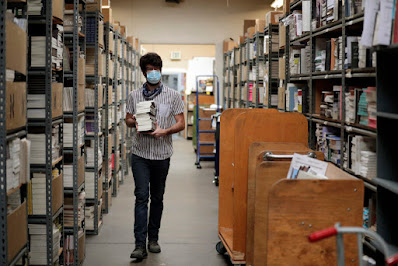 I wasn’t expecting quite so lively a discussion regarding my suggestion on Facebook that more small presses might try producing print-on-demand books, but since I got it, the responses made me realize I had more to say.

What everyone on that thread probably knows is that the publishing world continues to change, inevitably, and what was true 20-30 years ago has become something else now. Of course, it’s easier to know something than to understand the implications of knowing it.

When I was first aware of it, what was great about Small Press Distribution was that it was unlike nearly everything else: a great online bookstore of otherwise hard to find small press books. 20-30 years ago, it was already true that there weren’t many on-the-street bookstores where one could find a range of interesting small press literature. In Buffalo when I lived there I had Talking Leaves nearby, and when I lived in D.C. I had Bridge Street Books.
I relied less on SPD than other people might who lived in towns or cities where finding a range of books was difficult or impossible, and even then SPD had things hard for me to get elsewhere. SPD was an early online book goldmine. It served an alternative literary culture that was spreading out to more and more places and becoming less defined solely by people in the few major urban areas in the U.S. that had a thriving literary scene and lots of local readers of literature.

Having physically limited spaces, bookstores have never stocked everything. They’ve always had to choose what is relevant to give space to. An online distribution store like SPD still needs to have a warehouse and so has space and employee limitations as well. In any case, no one distributor can possibly distribute everything and so decisions have to be made about what to include and why.

What we see now is an age of the internet very different than 2002. There are more small presses, and smaller presses (“micropresses,” if you think providing micro labels will help) than ever. They have an internet presence and are capable of making well-produced books using online production methods (sorry, don’t know what else to call them) much more sophisticated than in the past. Some people buy directly from these small presses through their websites, while these presses often still want and need other options for distribution.

We also live in an environment of overwhelmingly large online corporate entities that provide more distribution than an organization like SPD can and can cause serious harm to the very concept of an independent press or bookstore even while providing useful distribution services. Obviously, these corporate behemoths have made the survival of great independent local bookstores more difficult, even in the urban environments that used to support them, and they threaten the independence of an organization like SPD as well.

What I think is often difficult for everybody is learning how to handle an evolving situation (which of course is what all situations are, says a voice in my head). Newer small presses need new outlets, older small presses also may need new outlets but also feel new pressures threatening the degree of independence they fought hard for in the past and are still fighting for now. And readers want to be able to get books.

Evolving publication realities combine with an ever-increasing diffusion of literary cultures which are oddly enough both more localized and more homogenized at the same time. People anywhere are now more easily in touch with people anywhere else, and an urban literary scene defining itself in relative isolation so that “schools of poetry” develop is becoming more and more a thing of the past. We don’t even have to imagine what would happen now if if there was a group of surrealists trying to decide stridently who’s in and who’s out, because we can see it all around: they would be criticized instantly and precisely for their exclusivity on the grounds of race / class / gender / culture and various other aspects of their lack of equal access.

I don’t know any more than anyone else about how this publishing environment will continue to evolve. New presses and publishing options will keep arising and some will stick around longer than others. Massive corporate conglomerates will keep trying to own all that can be owned and to turn every existing possibility into something ownable. There will continue to be writers and presses and bookstores and even distributors resisting corporatizing and homogenizing forces. Some things will work better and longer than others, and that includes the vicious ones. Books in whatever form will continue to be produced. The specifics are beyond me, obviously. “You can’t step in the same river twice” wasn’t created as an advertising slogan.

I’m posting this on Facebook though I know it’s long, and putting it on my blog too so it won’t disappear (vain hope, huh?) quite so quickly. I remember when live literary conversations had to happen in person or over the phone and when the most interesting (to me) published conversations were happening in publications that existed only in a few hundred copies.

Then conversations like that moved to email and then to listservs and online group discussions and then to blogs where individuals had more control and then to social media and probably through some available formats I never even noticed. With increased opportunity comes increased ephemerality. At the same time, more books covering those conversations continued and continue to be published, calling into further question the idea that it’s even possible to be fully informed about a conversation.

By the moment anybody stops talking, the situation they were talking about has already changed.
Posted by mark wallace at 11:50 AM No comments:

I’m pleased to have some poems in the March 2022 of The Brooklyn Rail. Thanks to Anselm Berrigan and the other editors and workers who do such a great job with that publication. Here’s the link.


Also, I’m reading a few minutes of poetry this Friday March 11 around 11:10 or 11:15 a.m. Pacific Time for The Brooklyn Rail at the conclusion of an discussion roundtable on the art of Ad Reinhardt. The event is free although you do need to sign up beforehand. The discussion begins at 10 a.m. Pacific Time. Scroll to the bottom of the event page to sign up.


https://brooklynrail.org/events/2022/03/11/color-out-of-darkness-ad-reinhardt-curated-by-james-turrell/?fbclid=IwAR3SUUyoPi9K9ys9clL3MihPy3-WJRNy_bnM1kaBqjTV73U9dL_c7CjJHMA
Posted by mark wallace at 5:01 PM No comments: