a poet to look out for 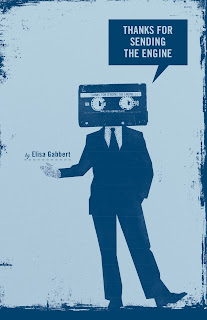 An up-and-coming poet whose work has remained on my mind since I read it for the first time this year is Elisa Gabbert, whose 2007 chapbook Thanks for Sending the Engine was published by Kitchen Press. Her work resonates for me with a number of other outstanding women poets who have been around a little longer: K. Lorraine Graham (towards whose work I’m understandably partial), Stephanie Young, and precursors by only a few more years like Nada Gordon and Catherine Wagner. All of their writing shares a few things in common; restless energy, a willingness to turn the expected upside down, and an ability to bluntly startle with things usually supposed to remain unsaid. There’s a relationship between sexual desire, anger, and an exploration of the dynamics of power in specific human interactions that appears in the writing of these women and that strikes me as different from what came before it. But I’m not sure I can define that difference just yet. Maybe it’s a kind of aggressive femininity, an active contradiction that challenges the common definition of femininity in cultural studies contexts as a passivity born of powerlessness. 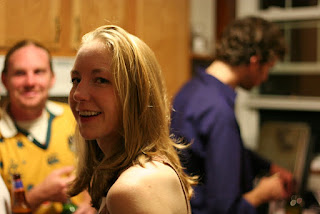 Thanks For Sending The Engine has a number of really memorable poems, funny, insightful and daring. Gabbert is eager to put the more intense aspects of human behavior on display, even and especially those things that we all know we’re supposed to keep to ourselves: contradictions, blindspots, neediness, annoyance, the desire to act badly just so we don’t have to listen to somebody drone on about everything that’s safe to say. An exhilarating chaos runs through her poems, one that’s aware of itself as performance at the same that the performance collapses distinctions between what’s playful and what’s serious. The metaphor/image game poems like "What The World Was Like" or "Blogpoem W/Epigraph" show a flexible, wide-ranging, but also relaxed ability with language. But as fun as they are at moments, they’re a little less down and dirty than my favorite poems here: "Blogpoem w/Ellipses,", "Lousy Day Blogpoem," "Blogpoem @Sea," to name just some.

Take me to the library: I’m in the mood
to get murdered. Mm, murder in the stacks:
shove the LING shelving over and let those
uncracked grammars in teal and burnt umber
make papery work of the burying. Chris,
this is me courting depression, or it courting
me. I’m not seduced by death, just death’s
techniques—the way it lets me let it buy me
a drink. Then drives me home with the lights
off, in stealth mode. I want that void IN me.

If the casual line breaks seem obviously New York School, the frenetic and fierce perversity feels unique. The lines attack and reveal at the same time. The narrator may care what Chris thinks but that’s not going to stop her from requiring Chris, and herself, to understand exactly what’s on her mind. But the desire for self-destruction expressed here isn’t the same as giving way to that desire. Instead, the bluntness of the sexual metaphor at the end of the passage suggests not so much a giving in to the death drive as a willingness to welcome it and acknowledge its presence, then to go on from there.

In her poems, Gabbert relentlessly turns inside out the daily foibles of personal relationships and people's fucked up feelings, including the narrator's own. And she does it frequently with a frame of reference that understands the larger contexts of social institutions and art. I wonder whether as Gabbert’s writing continues she’ll be able to stretch to more areas outside the interpersonal, or find new ways of exploring it. This isn’t a criticism so much as a way of asking whether her poems can continue to be in the eye of the maelstrom, or whether as time goes on that focus will become a restraint that she’ll feel the need to step outside of. But maybe that’s just a question from right out of the boring drone that Gabbert, and so many of the rest of us if we can be honest, have gotten tired of hearing. If as Frank O’Hara said, “You just go on your nerve,” Gabbert’s got as much nerve as anybody. For a first chapbook, Thanks For Sending the Engine is all that it needs to be to make all sorts of things happen. Although I’ve never met her or heard her read, if she’s giving a reading anywhere near you, go see it.

And to see where she’s started to go next, check out even the details have details, a workshop blog of one-a-day poems for poetry month written by Elisa and her collaborator Kathleen Rooney.

I really like Elisa Gabbert's poems, for the reasons you describe and also for their crazy-addictive music. I've not really thought this through yet, but I also think there's an awareness of a sort of post-plath/feminist body in Gabbert's poetry (and in the poetry of the other women you mention; I'd add Danielle Pafunda to that list also).

i see some of what you point out generally with this poem specifically -- tho it's always hard to tell with one poem -- an aggressive feminism, a psychosexual drama/fantasy in which self and other are equally implicated. the overall rhetorical strategy here is quite familiar -- the chris here even makes me think of berrigan's "dear chris, it's me, hello...," while there is something unique and compelling about the tone of this poem: something about admitting to sex-death fantasies in the library stacks (how nerdy!) seems to me to be really putting the self in a position of vulnerability even as the poem seems to will this as an act of table-turning empowerment.

the other tone that really resonates here, tho, is a kind of flippancy that i find all too common these days. "I’m not seduced by death," so goes the line that epitomizes this, "just death’s
techniques." from the position of one whose life is not threatened in any significant or immediate way, death can be aestheticized or trivialized in this manner. (and of course fascism does so with serious end results.)

now when this dynamic is gendered in a way that it seems to be here, it sits better with me, the powerless having a laugh on the powerful. and the poem concludes on a strong affirmation (of negation, naturally) that i think also rescues the poem from what would for me be an unsatisfying if not problematic flippancy.

i'm new to gabbert's work, so thanks!

Thanks for both these helpful comments.

Michelle, what you say about Plath and the feminist body makes sense. For Plath the female body is often about horror, distance, a sort of otherness even from herself. That contrasts a lot with much of the feminist poetry and art of the later 60s and 70s, with its tendency to celebrate the female body and more directly protest patriarchal culture--although I wouldn't want to overgeneralize about that.

What's interesting about Gabbert and the work of other poets with whom I'm grouping her (I don't know Danielle Pafunda's work, so thanks for the tip) is that the sense of horror, celebration, and protest can be so profoundly mixed--sometimes horror, sometimes celebration, sometimes whatever else. I do indeed think there's something really new about that.

Tom, my apologies if I seemed like I was quoting the whole Gabbert poem. But the poem doesn't end there. In any case I do think she runs all sorts of risks regarding tone and what can be taken seriously or not; many parts of her poems read like dares not to take her seriously, almost a way of saying "I know you don't think I really mean this." But the taunting, flirtatious, and goofy elements of her poems mix very intriguingly with the angry, hurt, emotionally dark elements. It's a very cool mix and tough to pin down, which I guess is just the way she wants it.

I'd like to take up the issue of "flippancy" again later (I want the focus here to stay on Gabbert's work), so look for that one to return in another post.

I am curious about Tom's last couple of paragraphs here, one regarding flippancy--it seems that Gabbert's work, this poem particularly, undercuts the power dyamic of the top-bottom/male-female, which has become paradigmatic in some works, and so invites us to want to say flippant, or hysterically flippant, etc. A nice move, if you like chess. Which makes me want to say if Gabbert likes chess.

Regards the particular feminism that Mark talks about, I'm struck by how many excellent journals have cropped up in the past several years with this kind of kindlessness--from Saint Elizabeth Street to Absent to Aufgabe.

And yes, my guess is that Gabbert does indeed play a mean game of chess.

Thanks, Mark. You did such a great job during your DC days, bringing attention to so many poets. My bookshelves have many additions that probably would not be there, were it not for your endeavors as a reading series director and as a publisher. Your efforts were of particular value to those of us of the older generation, I believe. And your introductions were always illuminating and imaginative. So, I’m glad that you’ve committed to this blog, which means that there will be some compensation for your physical absence.

I shall get myself a copy of Thanks for Sending the Engine, and I look forward to reading it