Maryrose Larkin's The Book of Ocean 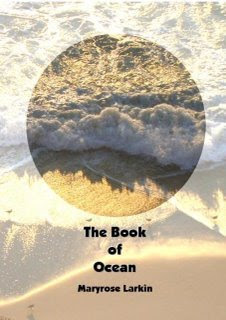 I first met Maryrose Larkin in the later 1990s, when she still lived in the DC-Baltimore area. I believe it was Buck Downs who put her in touch with me. I published some of her work in my poetry magazine Situation, and she gave a reading in the Ruthless Grip Poetry Series that I hosted, when the series was still held in the Ruthless Grip Art Project gallery on the corner of 15th and U. Not long after that, Maryrose left the east coast, and I traded e-mails with her on occasion as she traveled west in various stages. She stopped in Lawrence, Kansas for several years, then ended up in Portland, Oregon, where she now lives, and where for several years she has been involved with the Spare Room collective, a group that organizes poetry readings and other arts events. There’s a very good set of poets in Portland these days, including Kaia Sand, Jules Boykoff, Joel Betteridge, Cynthia Kimball, Rodney Koeneke, and a number of others. When I was in Portland for the first time in my life at the end of March, to give a reading with Lorraine Graham hosted by the Spare Room group, the event was a genuine pleasure, with a good dinner beforehand and drinks after, and best of all a thoughtful and responsive audience. The Portland poetry community reminded me how much in the San Diego area I miss having a context in which innovative poetry is thriving in the city itself, not just at its universities. Maryrose is one of the people in Portland whose commitment to running literary events makes that kind of community possible.

This year, Catherne Daly’s i.e. press, out of Los Angeles, has published Maryrose’s first full-length collection of poetry, The Book of Ocean. And a fine first book it is, with sharply etched rhythms, and an intellectual complexity that’s insightful and emotionally resonant. Central to The Book of Ocean is a sense of the world and human experience in it as a kind of layering, almost a palimpsest like in the work of H.D., in which the peeling away of each layer reveals a further layer of significance.

From the beginning of the book’s opening poem, “Brief Gravity”:

I rhyme with the ground

something terrible had gone wrong, now I think
something happened, but just
a planet


everything
earth occurs in resemblance
In the material world, physics
trap a pound of feathers in a pound of gold

(Note: The limitations of Blogger won't allow me, or at least I can't figure out how, to retain the original spacing of the poems, which are open field verse in which white space is crucial to the rhythm).

There are at least four main interweaved conceptual strands of The Book of Ocean, some of them highlighted in this poem, others emerging more blatantly elsewhere. There’s the geological, the literal fact of the earth and its geological strata as a condition of materiality, time and change. Closely connected to this is the historical; time and change understood in the context of human beings as a group. Then there’s also the self, a process of reflection and creativity, connection and dissolution. Finally, there’s a mythological impulse, the straining to find an overall meaning to all these layers of existence.

This mythological impulse, again reminiscent of H.D., is reflected by the organization of the book into six sections: Natural History, Gardens, Hours, The Life List, Music, Ocean. But crucial to The Book of Ocean is that the mythologically coherent totality that the book’s organization might suggest often collapses in the poems themselves. If there’s a mythology here, it’s one that deconstructs itself, challenging its own overarching meaning-making drives. The same can be said of the book’s other conceptual strands. There’s tension, action and reaction, but finally no stable whole. If earth and history make the self possible, the self shapes comprehension regarding earth and history. But there are also ways in which self struggles against earth and history, while earth and history confront the self with its often painful limitations.

The opening of the poem “Baptism” suggests some of the particulars at stake in these concepts:


her memories of arrival in this country

Here, the figure of the immigrant (or perhaps the slave) has become the self who records memories of change in countries and landscapes, while confronting and being shaped by the newness of “white strange gardens.” In context with the rest of the poem, these lines suggest that the concept of the immigrant is essential to human experience. The movement from one landscape, nation, culture, and natural environment to another seems an unavoidable change in the history of the self. While calling up particular histories of immigration, “Baptism” shows that the concept of the immigrant is not relevant simply to some people’s histories, but can serve as a resonant metaphor for many selves and their travels.

I'm often skeptical of such large scale myths and metaphors, because of the way they sometimes ignore historical specifics. And it’s precisely the fact that it shares this skepticism that makes The Book of Ocean so convincing to me. Given all the interweaved concepts, none finally controls the other, and none allows for more than a partial understanding of any phenomenon. The poems are filled with ellipses, with boundaries that can’t be crossed and statements that aren’t quite made, with silences and absences:

illumed by earth this body

over silence
I cannot pass

In fact, many moments in The Book of Ocean teeter on the edge of intelligibility, as if at any moment coherence could be swept away for good.

Most of the poems in the book are ultimately about processes of interaction more than definitive conclusions, as the opening of “Changeling” implies:

We cross the phenomena of light

Here is what we have twisted
There is the nature of

A name is not description but ornament, becoming and
undergoing

To be wholly replaced as we travel

Look how quickly she becomes other, a changeling
In circumstances like these, understanding can never be either fixed or permanent, but becomes a fundamentally interactive process. And what The Book of Ocean finally shows is that writing poems can be a way of engaging the interactive condition of the changeling. The book’s finely honed rhythms, alternately clipped and wave-like, never let either the repetitions of the ocean or the disconnection of the fragment become dominant modes.

If you ask me, the world of poetry needs more people like Maryrose Larkin. She works on her writing carefully and consistently, and takes an active role in the life of local poetry communities. She’s not trying to be a power-broker or an in-the-poetry-world-news tastemaker. The Book of Ocean isn’t going to make any high profile Best of the Year poetry lists although probably it should, and it certainly makes my list, for whatever that’s worth. I don’t mean that I’m against writers whose work or personality has achieved a higher profile, or who are more eager to obtain attention for their concerns. But it’s important to remember that a lot of the hard work of poetry, the writing of it, and the effort of bringing a community of shared interests together, is done by people whose commitment to poetry may be more important to them, and bring more significance to their life and their interactions with others, than either broader public recognition or official reward.
Posted by mark wallace at 3:04 PM

althoug i.e. press agressively supports its authors; b of o is entered in the norma farber, kate tufts, nominated for pen west and nbcc awards, which the book deserves to sweep!

Don't know what it takes, but it'd be great to see this nominated for the Oregon Book Awards as well, which could use a shot in the arm like this. It's great to see the book being entered for the awards above.