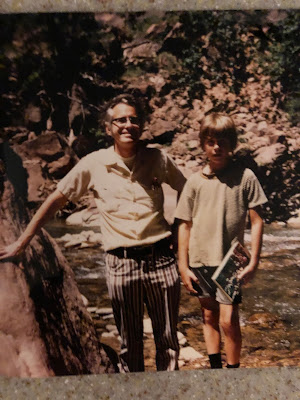 (This piece announcing the death of my father first appeared as a Facebook post on February 5, 2021. I'm posting it here so that it is more readily available.)

Now that immediate family has been notified, I just wanted to let people know that my father, Dewey Diaz Wallace, Jr. passed away late morning on Thursday February 4 from a variety of physical ailments not related to COVID. He was 85 years old.

I have many things to say about him, but one it occurred to me to share now: when he was visiting his own father at the time he was passing, in 1987, several days before my grandfather died he recited to my father “the whole of William Cullen Bryant’s ‘Thanatopsis,’” as my father said, a poem about the meaning and implications of death first published in 1817. It may have been written as early as 1811, when Bryant was only seventeen years old.

My grandfather had been required as a boy in school to memorize the poem, when he was somewhere between 6 and 10 years old, and at the age of 89 he could apparently recall the poem from memory.

I don’t think that in American public schools we ask young children anymore to memorize poems about the meaning of death, and that’s a good thing, but the family story has remained with me as an example of the power of memory even and perhaps especially at the point of death. On my final visit to my father, I have no idea what was going through his mind, but I think it’s safe to say that memory and dying are experiences more powerful than the living can comprehend. One of the few public lectures I heard my father give was on the subject of the power of mystery, and I learned from him, and from my grandfather, and from many others too, that death is a powerful and mysterious part of what it means to have lived at all. Curiously, although Bryant’s poem belongs to a world view that has faded, the message of his poem is close to that exact same one.
Bryant's poem can be found here:
https://www.poetryfoundation.org/poems/50465/thanatopsis