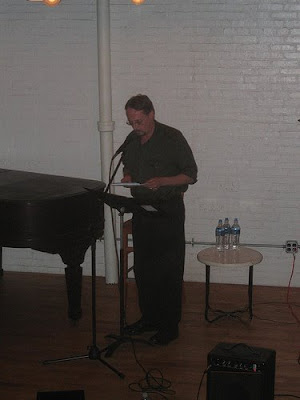 One of the great things about traveling, even when I'm only going back to places where I used to live, is the chance to meet up with old friends, acquaintances, or new friends, and to talk about things I don't often get to discuss--their way of seeing the world, for instance.

I'm having lunch with Terry Winch today, a great way to get in gear for a new year of poetry, fiction, and criticism. I've never written criticism as such about Terry's work, but I did once introduce him during a celebration of his work that took place at George Washington University, in early 2005, I think. Following is the introduction I gave for him that night at an event full of both students and many of Terry's local friends and readers. If it's hardly a piece of close analysis, I hope it at least says something about why so many people like what Terry does. And while I'm still traveling and won't be writing much new for another week or two, this introduction reminds me of why it's people like Terry who make the world of writers and writing seem like a pleasant environment sometimes, despite all inevitable conflicts.

Although he’s humble enough that I hope saying so doesn’t embarrass him, nonetheless I’m pleased tonight to introduce you to a writer who has stood for several decades now as an example of what is possible in the musical, literary, and cultural life of Washington, DC. In fact I’m tempted to call Terry Winch a local legend, because he certainly deserves that status, if it weren’t for the fact that there’s something about the idea of a legend that suggests an existence primarily in the past. But while Terry’s work shows a complicated understanding of the past, especially but hardly exclusively through his interest in the history of Irish Americans, he remains very involved in the literary life of the present. Terry has encouraged the work, and paid close attention to the lives, of other DC writers, artists, and musicians. His presence in DC has helped many others in the city imagine what they themselves might be capable of if they can maintain Terry’s sense of the importance of remaining committed.

Terry is nothing if not multi-talented. He’s a songwriter, an accomplished accordion player, a fiction writer, a memoirist, and perhaps most centrally a poet whose work can be by turns moving, ironic, and insightful. But what impresses me most about the variety of Terry’s abilities is the almost casual openness with which he moves between these talents. His work never calls attention to its own range, but instead explores the possibilities in the various media he has taken on with a sense of curiosity and adventure that puts the process of creation before the self-importance of the creator. What I’m saying is, Terry doesn’t do all these things to prove he can do them, but because he’s genuinely intrigued by seeing what will happen. His work embodies a truth worth understanding for all of us interested in literature: that the goal of the best writing isn’t to show off the talent of the writer, but to be a way of living life more fully by becoming engaged with the world around us.

This truth shows itself in what to my mind is the most consistent lesson about literature that Terry’s work teaches me, which is that the value of presenting the thing itself is always the best way to present one’s ideas and emotions about the thing. There’s a kind of understatement about Terry’s writing that always seems to me incredibly convincing. The calm, matter of fact voice of his stories and poems never focuses on self-importance but on the story, the situation, the characters and the contexts of it, even when the circumstances have profound emotions attached. The quiet precision of the language allows us to feel the situation like it seems the writer does. We aren’t told of happiness, anger, despair, but instead are allowed to participate in the complex human scenes from which those emotions arise. And this engagement seems to happen without forcing it. Reading Terry’s work is not like sitting in the back of the audience while the guy on stage goes on and on about his wild experiences, although the experiences he discusses can be pretty wild. Instead it’s more like walking down the street and running into a friend who says hey, you won’t believe what I just saw, and it’s true, you don’t believe it, it seems too strange to be real, or no, that’s not right. It seems just strange enough to have the absolute conviction of the real.

Yet through this understatement Terry presents readers with an impressively broad panorama of the 20th and 21st centuries. The life of Irish American immigrants living in New York from the 30s to the 50s, with its hard work and explosive celebrations and moments of community, rage, and loss; his own life in a working Irish band on the road, Celtic Thunder, primarily through the 1980s; trips to Ireland, trips along the East Coast of the U.S. in freezing cars late at night; odd encounters with cab drivers, famous Irish musicians, famous punk musicians, with bar owners and bar fighters and troubled friends and the constant need to find somewhere to eat late at night; with street dancers and dogs on bar stools; struggles with illness and the grinding regularity of work. These concerns are focused by a tight, poetic language that never says more than it has to and always ends up somewhere unexpected, and which, perhaps most strikingly in his poems, takes on a gripping vividness, the words themselves energetically alive to the shock of experience.

I remember talking once with Terry after a reading about the risks that writers and other artists face in a current American social environment which rarely respects creative risks, how for some people it can seem easier to give up, or they just get tired. In thinking about the pitfalls one can face, Terry suggested to me that one of the reasons he himself never gave in to the many vices available to a musician on the road was his sense of always being curious about what was out there, always wanting to know more. “There are just so many things I’m interested in doing, in finding out about,” he said to me, “that I don’t want to waste any of the time that I actually have.” As always with Terry, he was making no grand claim about himself, just explaining why he keeps writing, keeps listening to others, keeps putting himself on the line. But as I’ve often found true of him and his work, it’s just that kind of casual wisdom that makes him so worth hearing and talking with. So it’s my great pleasure to introduce you to Terry Winch.

What a fascinating person you make him sound! Could we have more on him, please?

Poetry makes me sad because it makes me look at reality and think.