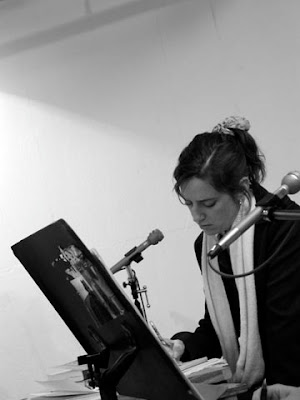 Two new chapbooks by Stephanie Rioux (pictured above at LA-Lit), the minimalist Sticks (Mindmade Books), and the very much not minimalist collection of prose poems My Beautiful Beds (Insert Press), confirm again that Rioux is one of the most interesting up-and-coming, too-little-known poets around. With its density, invented words, and linguistic games, as well as its focus on natural processes and sexuality and its almost Irish tone, My Beautiful Beds seems strikingly reminiscent of late James Joyce (reminding me how little contemporary literature has really taken up Joyceian experiments), although the context and concerns are more women-centered and defiant. “oft what swindles beds leaks; and ‘s fonder of reading gang fame; which blush on, inpillow, also that what, on which we gayly last so few doables.” If there’s a tiny bit of sealed-off, overly hermetic reach towards the past, it’s more than countered by an earthy, folky, but clearly linguistically risk-taking energy. Sticks, in contrast, features no more than a few words per page, suggestive and resonant even as they vanish: “one is minuscule” is what one whole page reads.


Gary L. McDowell’s They Speak of Fruit (Cooper Dillon Books) features conventional lyric poems, to a certain degree, although they also often make energetic and effective use of open field poetics. There’s a intriguing tension in these poems, not fully worked out it seems to me, between contemporary matter-of-factness, heightened deep image surrealist hyper sensitivity a la James Wright, and tough working guy rural context reminiscent of Jim Harrison. Still, the poems are full of lines both of great beauty and of understated bluntness, and McDowell is clearly a poet worth watching. “Until bones, your bones, fall to the ground, I’ll not show myself.”


Jane Sprague’s The Port Of Los Angeles (Chax Press) is an important work of contemporary poetry despite its modest size. A combination of materialist history, precise lyric detail, and restrained fierceness that’s by turns ironic, melancholy and angry, these poems trace conditions in Los Angeles from its port outward towards its larger cultural conditions and problems. Its documentary goals contain important information, yet the poetry is always more than simply a vehicle for conveying history. These are poems with powerful feeling and emotional exploration as well as intellect. They’re full of an incantatory and haunting energy: “we follow helicopter beams to the beach/we watch the bust from afar/watch sirens flare flickerblue/watched people handcuffed wade through water to beach to car to confinement/we watch the one who gets away/people locked containers."


Craig Santos Perez’s second book, from Unincorporated Territory (Saina) (Omnidawn), makes undeniably clear why so many people seem excited about his work, and why he’s a writer who  certainly will be going on to have a powerful effect on contemporary poetry. This is an impressive, even intimidating, book. Historically detailed about both the history of Guam and the history of his own family both in Guam and beyond, this is a book about politics, race, culture and the often grim facts about what goes undocumented and unheard—or worse, what does get documented, but in the most abusive and detached pseudo-objective and exploitative capitalist ways. These poems offer a powerful indictment of the history of U.S. misuse of Guam, its land, its water, and its citizens, and the combination of large-scale documentation and individual memoir make the damages brutally clear and often emotionally wrenching. The book works with the Chamorro language as well as English, and features a fascinating array of extreme aesthetic experiments. It’s difficult to capture the open-field poetics of these poems in the limited space options of a blog review. “i didn’t know ‘sea level’/would remind me of ‘shelter’/in the material sheaths of the body the smallest wave pronounces/’light derives from/what it touches.’” If ultimately I admired, respected, and liked this book more than I loved it, that may be because of the way the aesthetic affects sometimes seemed a bit after-the-fact. I wondered at times whether a less experimental approach would really have changed that much about what Perez is attempting in this book, and I wasn’t always certain that the aesthetic affects seemed essential.


I had never heard of Argentine poet Mercedes Roffé until her book, Like the Rains Come: Selected Poems 1987-2006 (Shearsman Books), translated by Janet Greenberg, arrived in the mail. I thought for a moment that despite its open-field poetics and very precise sense of line and break, these poems were going to be too conventionally high lyrical in tone, but I quickly moved beyond that to finding them much more unique and surprising. Although it’s drawn more in outline than fully (perhaps the result of being a fairly small Selected, although I have no information about the size of her total poetic output), a mythos and world view emerges in these poems, one that veers from grandly cosmic to politically tense to keenly focused on human interaction and emotion. The intellect in them is formidable, but also deceivingly subtle. Again, the book’s spacing and the limitations of blogger make it difficult to give an adequate portrayal through quotation. “Metaphor has died./Nothing resembles anything else./The smallest fraction of each atom engrossed in the task of accomplishing its minimum commandment.”It took me awhile to notice the depth and degree of information in these poems because of their refusal of grandstanding showiness. Roffé is a writer whom I hope more U.S. readers will come to know.
Posted by mark wallace at 8:16 AM

Oh: and thanks for the tips on the other chappys, some of which I hadn't yet heard of!

Thanks for the words on They Speak of Fruit, Mark! Really appreciate it! My first full-length is due out this late summer/early fall...I'll keep ya updated, if you're interested. Anyway, thanks again, man!