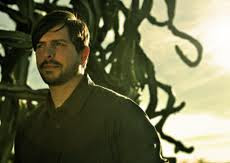 The chapbook flings a wide range of reference (especially regarding the history of Chinese communism) and theory and genuinely scary wild contradictions at its readers with an abandoned and daring glee. If the poems wear their influences a bit too clearly at times, and if a few lines overreach into bits of generalized rhetoric (“alienation is played out and global capital is bullshit”), that doesn’t significantly harm the unassailably charismatic social grid feedback going on in these poems. I’m interested to see what Ang does next, and I bet I’m not the only one.
Posted by mark wallace at 9:10 AM